NIA CHARLESTOWN NEVIS (March 13, 2013) — Disaster risk management was something critical and important for every single citizen. That view was expressed by Premier of Nevis and Minister responsible for Disaster Management Hon. Vance Amory.

His comment came when he delivered remarks at the start of an Organization of American States (OAS) sponsored project on March 11, 2013, entitled “Building resilience to natural hazards, one community at a time” in collaboration with HOPE (Helping Our People Excel) Nevis Inc. and the Nevis Disaster Management Department (NDMO). It was held at the Llewellyn Newton Disaster Management Facility at Long Point.

“The important thing for me is that all of us need to recognise that disaster risk management is critical and important for every single citizen. It is not just the responsibility of Mr. Blackett and Mr. Dyer and the Department of Disaster Management, every single citizen every single house holder has a role to play in the preservation of the environment and of the effort to reduce any risk which is associated with any disaster of whatever type,” he said.

Mr. Amory publicly recognised HOPE Nevis for its decision to spearhead the initiative and thanked the organisation of young persons for their partnership with the Nevis Island Administration in such a venture.

“I am happy that the HOPE organisation, a group of young people, have decided that they will take a leadership role in creating this awareness among our people, this greater awareness in our people so that they are taking and assuming the role in leading the charge in ensuring that we have an appreciation of environment, what it means and how we can take steps to protect and enhance our environment.

“It also means for me that we engage our people in acquiring a greater understanding of how they can play a role in the protection of the environment,” he said.

Meantime Project Officer at the NDMO Mr. Brian Dyer explained that the project was aimed at improving the preparedness levels of communities on Nevis to respond to disasters which affected their locality. 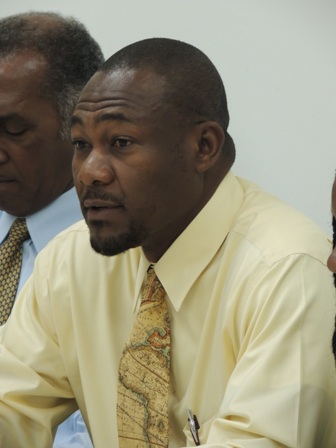 Among the unique attributes of a community Mr. Dyer pointed to were the threat and hazards profile and vulnerabilities of the area; the existing infrastructure; resource and skills within the community and the population composition of the community.

The Project, Mr. Dyer stated, was expected to improve the technical skills of the participants and enhance team management.

“It also improves the quality and availability of disaster management tools and develops the training needs in communities that are not currently addressed by the limited resources made available to Disaster Management.

“Additionally, the training will build the capacity of community volunteers, improve preparedness and the coordination of the emergency response mechanisms at all levels,” he said.

The NDMO Project Officer further added that the Sustainable Communities Project would offer a multidimensional and successful educational approach to participants within all five parishes on Nevis.

Mr. Dyer expressed his appreciation and profound gratitude to HOPE Nevis Inc and the OAS for what he described as a bold and courageous initiative.