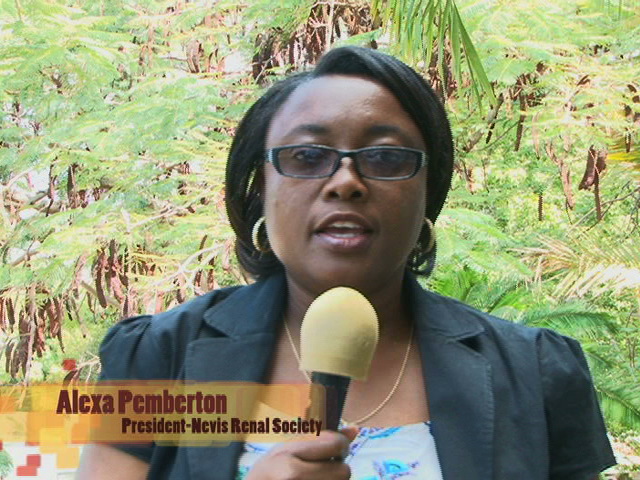 NIA CHARLESTOWN NEVIS (March 13, 2013) — The Renal Society on Nevis has embarked on its second annual week of activities, to bring sharper attention to the issue of kidney disease. The Society’s President Mrs Alexa Pemberton told the Department of Information recently, that the week was part of their educational drive.

The week commenced from March 10, 2013, with a church service at the Church of God of Prophecy on Craddock Road, followed by an address by Deputy Premier and Minister of Health on Nevis Hon Mark Brantley one day later on March 11. Other activities have been scheduled to coincide with the observance of World Kidney Day on March 15th as Mrs. Pemberton explained.

“On Thursday we will have a radio and television address by our vice president and we will also have a lecture at 2 p.m. at the Credit Union Conference Room. This lecture will be done by Dr. Vichara Sahely. He is an internal specialist from St. Kitts.

“On Friday, our big day is Friday. We will have an all day health fair at the Memorial Square in Charlestown and we will be offering free health tests. We’ll be giving free pressure, free blood sugar tests and we’ll also be offering free tests for the kidneys and this is a test called a micro albumin test and it gives early detection of kidney damage,” she said.

Mrs. Pemberton also used the opportunity to invite members of the public particularly those who were hypertensive or diabetic to involve themselves in Friday’s event, where much information about the kidneys – how to care for them and prevent kidney damage – would be available.

The week of activities will continue on Saturday with a radio show on local Choice Radio on the “Good Ole Days” programme.

In an invited comment, Mrs. Pemberton explained that the Society had been able to raise the level of interest in Nevisians about the well being of kidneys and illnesses associated with that organ.

“The general response has been quite good because last year because of our awareness programme, especially with our micro albumin tests, a lot of doctors have been asking about it and we are now, probably going to ask the Lab to make it a regular test that’s available. It used to be but I guess it wasn’t used a lot so now we are trying to get that back as one of the regular tests and that the Lab offers because persons have been asking,” she said.

According to Mrs. Pemberton, people had been taking better care of their kidneys based on the feedback they had been receiving and the Society’s membership was growing. Notwithstanding, they continued to seek to recruit members since there was lots of work to be done.

She also mentioned that the former Nevis Island Administration (NIA) had as far as responded to kidney care ordered a Kidney Dialysis Unit which was expected on the island in April and the new Administration had agreed to have it established. The Society was in the process of planning to get persons trained for the Unit.

“We also know that in St. Kitts, kidney disease and kidney failure are also on the rise and I understand that as early as May they too will be opening a dialysis unit. So the Federation has been looking at and responding to kidney care,” she said in conclusion.

World Kidney Day is an initiative of the International Society of Nephrology (INS) and the International Federation of Kidney Foundations. The day of observance had been set aside in an effort to raise awareness of the importance of kidneys to overall health and to reduce the frequency and impact of kidney disease and its associated health problems worldwide.