Premier of Nevis Hon. Vance Amory during a tour of the Treasury Building in Charlestown gutted by an early morning fire on January 17, 2014
NIA CHARLESTOWN NEVIS (January 17, 2014) — An early morning fire on January 17, 2014, which gutted the building housing the Nevis Island Administration’s (NIA) Treasury, Inland Revenue and Value Added Tax departments and derailed services offered to the public, is under investigation by the Royal St. Christopher and Nevis Police Force and the Fire Services and as such the NIA would offer no speculation as to the cause of the fire.
Premier of Nevis Hon. Vance Amory made that announcement while he led his Cabinet colleagues on a tour of the gutted building later that day.
“In respect to the event, I just want you say to the people of Nevis and the people generally that they should see this as something which the Police are handling and the Fire services. They will do their investigation and they will then advice us as to what are their findings.
Until this point, we cannot say or even speculate about what transpired here in the early morning of Friday 17th,” he said.
However, Mr. Amory explained that the Administration would provide an update of the restoration of services as early as next week. 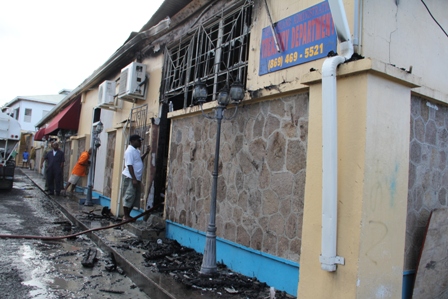 “I believe we can by next week have an update in respect of what the Government itself will do in terms of re-establishing its services of the Treasury and Inland Revenue and so on to serve the people and to get our business back again on track.
“We met this morning just before we came here, as a Cabinet, to discuss our options, what we can do as we settle those options. We will advise the public so that the people of Nevis and the people of St. Kitts can know what we will be doing to get the Government’s services back on track,” he said.
According to the Premier, the provision of services was one area which was severely impacted by the fire due to damage to the Government’s internal communications system.
“We have [departments] like the Water Department where people have gone there to pay bills and they cannot do so because the interconnectivity has been destroyed or has been disrupted for the time being.
“It will impact on our record keeping, our records which we now have to see what we have been able to salvage, what we will be able to reconstruct and look at our storage of that information offsite and see how we can then get that information back and then establish how we relocate the services to get the people of Nevis served by the Government’s departments which have been affected,” he explained.
Mr. Amory noted that with regard to the Government’s interdepartmental communications there was light at the end of the tunnel and some of the relevant equipment had been spared. 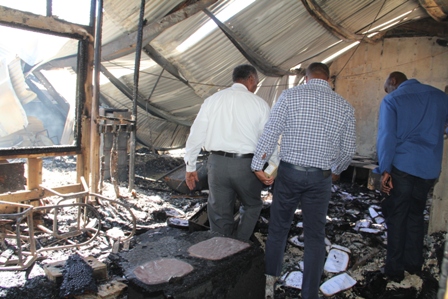 “Our whole interdepartmental connectivity has been disrupted. We believe, based on my discussions with the IT experts, that the equipment was not burnt but I think with all the water which was spread around, it was feared we may have had some equipment damage which would be assessed and then once it is assessed, we would know how quickly we can put things back together to interconnect the government services,” he said.
Regarding the more than 40 workers who had been affected Mr. Amory noted that he would discuss the way forward with the staff.
“The workers would have come to help this morning to see what they could salvage. We will be meeting them at 12:30 to discuss with them the effects of what has happened here and then to plan with the senior management how we move forward and we will communicate that with the staff in open forum,” he said.
Meantime, in response to an invited comment as to his own feelings on the incident, the Premier described it as a sad moment.
“As Head of Government and as a Nevisian I feel very devastated. I think it is sad that we have seen this kind of destruction. We don’t know the cause but the effect of this is costing us already in terms of man hours, in terms of services provided; in terms of ‘How do we replace what we have lost?’ So there is a very significant cost factor. 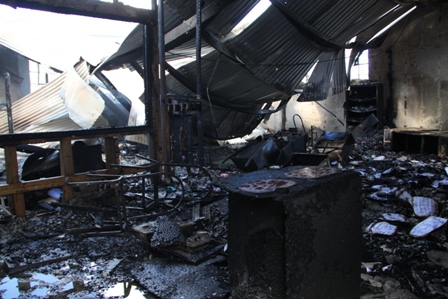 “The building because of the fierceness of the fire, we believe, may have suffered structural damage. It’s a concrete base wooden top in some areas so we have to do an assessment of the damage which has been caused and see, when the time comes for us to reconstruct, what we must do to strengthen this building if that is required,” he said.
The damage to the public building, Mr. Amory explained, meant that funding and assistance from friendly donors would have to be found.
“We have to find funding from some source and we would trust that we as a Government will have to assess that funding but we are hoping we will have some funding support from the Federal Government or from friendly donors who might be able to help us to reconstruct this building to establish our Departments of Treasury, Inland Revenue and VAT to ensure that we serve the people,” he said.