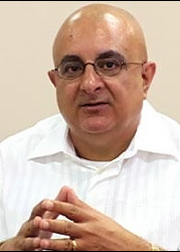 Senior Counsel, Mr.Anthony Astaphan
Charlestown, Nevis (Wednesday, November 23rd, 2011) – High Court Judge, the Hon. Justice Mario Michel announced in open court on Tuesday, that January 16th, 2012 had been identified as the date for the commencement of the trial of the Election Petition by the agreement of all parties in the matter. The NRP Administration maintains that Deputy Premier, the Hon. Hensley Daniel was duly re-elected on July 11th, defeating former Senator of the Nevis Island Assembly, Mark Brantley.

The announcement came two days into the originally planned trial schedule, which had to be shelved due to the untimely illness of Madam Justice Indra Hariprashad-Charles. To avoid jeopardizing evidence of a number of witnesses for the Petitioner who had traveled to Nevis for the trial, lawyers for Deputy Premier Daniel and the other Respondents agreed to allow the admission of “amplified” affidavits by those witnesses hence eliminating the need for the presence of a judge for the admission of those affidavits.
Antigua’s Resident High Court Judge, Hon. Justice Mario Michel, nevertheless traveled to Nevis on Tuesday, making himself available in the event there was any contention over the admission of the “amplified” affidavits. Instead, lawyers spent the major part of the day in Chambers and agreed on a number of Orders in order to facilitate the hearing of the Petition.

“We wanted to ensure we made some progress this week”, Senior Counsel Anthony Astaphan speaking to the Department of Information of the Nevis Island Administration following the adjournment of the Court.

Speaking to other matters, Astaphan said, “And there was an outstanding issue about whether or not a particular document or a list with photographs could be used. We agreed to that going in as well”.

In responding to the claims of Mark Brantley and the CCM that the NRP-led Administration was illegal and illegitimate, Astaphan said:  “The claims that because you have an election petition a government is illegal or illegitimate is nonsense. The Government is constitutionally in office. The Government is functioning, both the executive and legislative branches of the government.  The government is conducting the mandate of the people in education, in fisheries, in taxes, in international affairs, regional affairs and local affairs, public safety and so on”.

Astaphan derided the notion that there could be a illegitimate Government after an election, when the vote has been counted and publicized, without an order of the Court.

“It is a curious political phenomenon of recent vintage”.

He said it started off in Dominica, and then it was in St. Kitts and now in Nevis. “And people think because they lose and the people don’t vote for them the Government is illegitimate. It is political fiction that I totally do not ascribe to and I think it is just pure nonsense, frankly”.

Petitioner Mark Brantley of the opposition Concerned Citizens Movement (CCM) lost to incumbent Hensley Daniel of the Nevis Reformation Party (NRP) following a tight race for the St. John’s seat in the July 11 elections of the Nevis Island Assembly, which resulted in a 3 to 2-seat margin of victory and second term for the NRP Administration. The NRP also strengthened its mandate by receiving the majority popular vote.  Premier Joseph Parry trounced newcomer Keith Scarborough in the St. Thomas constituency, while Minister of Agriculture, the Hon. E. Robelto Hector strengthened his margin of victory over Michael Perkins.

Three sittings of the Island Assembly have already convened since the July election and a fourth sitting has been scheduled for November 28th, as the Administration moves forward with its busy legislative agenda to continue to improve the lives of all Nevisians.