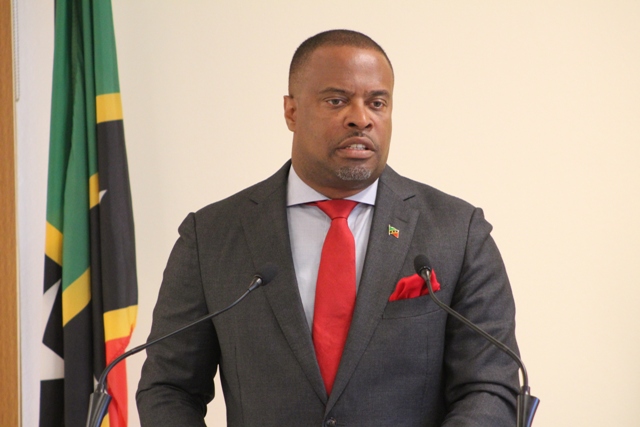 Hon. Mark Brantley, Premier of Nevis, at his monthly press conference at the Nevis Island Administration’s Cabinet Room at Pinney’s Estate on August 29, 2018

NIA CHARLESTOWN NEVIS (August 29, 2018) – Statistics are indicating an increase in employment on Nevis for the second quarter of 2018.

Hon. Mark Brantley, Premier of Nevis and Minister of Finance in the Nevis Island Administration (NIA) made the revelation at his monthly press conference at the NIA’s Cabinet Room at Pinney’s Estate on August 29, 2018.

“Job creation as you know, is something that is clearly important. Students are coming out of school on a regular basis each year and we need to find avenues for them by expanding the economy,” he said.

Mr. Brantley noted that the NIA absorbs many school leavers however, it continues to encourage the private sector to utilise the concessions given to them by the administration, in an effort to generate additional employment.

He stated that the administration is moving incrementally in the right direction where employment is concerned and believes the increase in jobs is significant.

“I believe the increase is also important because you will also understand the second quarter is when the economy tends to taper off because of the seasonal nature of our tourism product and so the high points tends to be around December/January and then you see things start to taper off April, May, June as the case may be…

“So the employment figures are trending in the right direction, 4.9 percent increase. We have more work to do in that regard and we continue to do so,” he said.