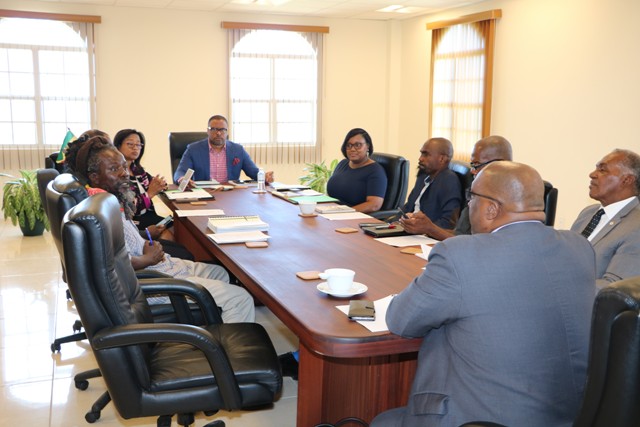 Dr. Hon. Timothy Harris; Hon. Mark Brantley, Premier of Nevis (head of the table), members of the St. Kitts and Nevis Marijuana Commission and some members of the Federal Cabinet at the Nevis Island Administration’s Cabinet Room at Pinney’s Estate on February 18, 2019

NIA CHARLESTOWN NEVIS (February 18, 2019) — Matters regarding the findings of the St. Kitts and Nevis Marijuana Commission were discussed at a Federal Cabinet meeting at the Nevis Island Administration’s Cabinet Room at Pinney’s Estate in Nevis on February 18, 2019.

Dr. Hon. Timothy Harris, Prime Minister of St. Kitts and Nevis, made the disclosure in a statement prior to the meeting which forms part of the Team Unity Administration’s 4th anniversary celebrations.

“On or about January 11, 2019, the report was made available for consideration of the Cabinet and the Cabinet had a preliminary look at this report during one of our regular meetings and determined that it could benefit from further engagement and interaction with the commissioners and several of the issues that were raised.

“Today’s special meeting of the Federal Cabinet on the island of Nevis allows for this historic document to be deliberated upon by the Cabinet taking into consideration input and feedback we anticipate to come from the commissioners,” he said.

The Government of St. Kitts and Nevis put together the commission mandating it to deal with marijuana, its use, consequences and the way forward. Phase one involved conducting a situational analysis and exploration of the latest evidence regarding the legal, medical, social, economic and religious implications of marijuana and its derivatives.

In Phase two a series of consultative meetings were held on both islands, while in Phase three the commissioners dealt with summarising the findings and producing a final report which would serve to inform the decisions of the Federal Cabinet.

Prime Minister Harris commended the team for their contribution to the work of the Commission. He stated that the government is pleased that based on a structured approach, to decision making it has been able to advance the discussion on marijuana at the level of Cabinet.

Dr. Harris added that an independent commission was established to help distill thoughts of the people of St. Kitts and Nevis on what will always be a controversial matter and the need to ensure that discussions were helpful, broad-based and had the ability to reach a wide cross-section of persons, personalities and entities within the country in an attempt to put together a consensual framework that would guide the Federal Government in its determination.

The prime minister acknowledged that the discussion on marijuana use has long detained public debate in St. Kitts and Nevis and in the Caribbean region, and three CARICOM member states have advanced their legislative agenda pertaining to their jurisdictions in regard to marijuana.

“Antigua and Barbuda, Jamaica was the first, and St. Vincent and the Grenadines, those are the three member states of the 15-member body that have advanced this particular discussion and so, as we move forward we will have that body … to help guide us when we reach and get to that particular stage of development,” he said.