NIA-CHARLESTOWN NEVIS (January 28, 2011) — Federal Minister of Information and Technology Hon. Glen Phillip, assured Nevisians that though slightly delayed, the implementation of the I-Literacy Initiative, One to One Laptop Programme would come in February instead of the initial January timeline and a network would also be provided to enable students to  utilise the cutting edge personal computers.

The Minister gave the guarantee on Thursday, at a briefing at the Ministry of Finance Conference Room in Nevis. He was accompanied by Attorney General and Minister of Legal Affairs in St. Kitts and Nevis Hon. Patrice Nisbett and technical staff from the Department of Technology in St. Kitts Ms. Keisha Archibald and Mr. Tristan Vasquez. Also present were officials from the Department of Information Technology on Nevis Mr. Quincy Prentice and Mr. Craig Davis

He explained that his visit was to update the public on the implementation progress of the programme with visits to the Charlestown Secondary and Gingerland Secondary Schools. The project targets students of all the secondary schools in the Federation who will receive a personal state of the art laptop, in an effort to bridge the digital divide in the Federation and to create an information literate society in which everyone had access to information.

“My visit to Nevis is twofold. I am here to assure the people and the students of Nevis that the laptop programme is definitely ongoing and (2) that we will create that network for our students to have the highway or to use their laptops… 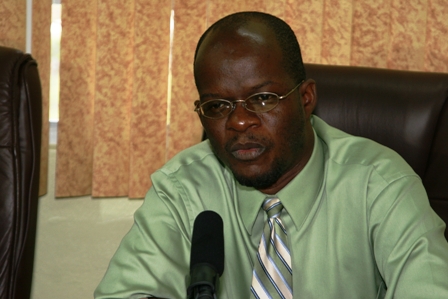 “We have had some delays because the laptops were supposed to be here on the island on January 16th. However, the Government of St. Kitts and Nevis has fulfilled all its contractual obligations at this point in time. We have contracted Hewlett Packard to get these laptops to the Federation of St. Kitts and Nevis,” he said.

The Minister explained that the delays were not on the part of the government but were as a result of a technical matter experienced by Hewlett Packard (HP) one of its partners in the programme.

“What we don’t want to lose here is that these laptops are on the cutting edge. For example they do have touch screen capabilities. What they (HP) said to me is that because of that component, they could not get certain parts for the volume of computers we requested and that has caused the delay. We have to remember that these laptops were created for the students of St. Kitts and Nevis. Each student in the secondary schools in Nevis would have a laptop.

“The issue is not with the Government of St. Kitts and Nevis it has to do with Hewlett Packard. So on Monday, HP will be holding a press conference to assure the people of St. Kitts and Nevis that the project is ongoing and it is not a fault of the Government of the Federation but it is some technical issues the company has and so we have to iron out this. I am told preliminary, that next month the Laptops are supposed to be here… (HP) understand the difficulty that it is creating for us and they are willing to come here and explain to the people what is happening,” he said.

Meantime, Mr. Phillip further explained that the Federal Government had seen the need to keep students in line with the rest of an ever changing competitive world and the I-Literacy Laptop Initiative would allow students of St. Kitts and Nevis to compete with others across the globe. 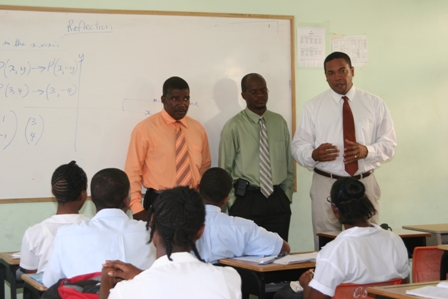 Federal Minister responsible for Information and Technology Hon. Glen Phillip (extreme left), Attorney General and Minister of Legal Affairs Hon. Patrice Nisbett (middle) visit with students at the Charlestown Secondary School to address their concerns related to the delayed implementation of the I-Literacy Initiative, One to One Laptop Programme. Principal of the Charlestown Secondary School Mr. Edson Elliott (left) looks on

The Information and Technology Minister also disclosed that the Federal Government had also partnered with Microsoft to provide training for teachers and some students.

The Minister also said Premier of Nevis and Minister of Education in the Nevis Island Administration Hon. Joseph Parry had since sought to extend the programme to 6th Formers on Nevis.

“I would like to mention, that the Premier has been calling and we have been trying to figure how we can assist the Sixth Form are here [on Nevis] also. That is something we have to go back to the drawing board for and see how best we can get them [computers] incorporated into the programme,” he said.

In an invited comment, Mr. Nisbett who had visited the students late in 2010 to introduce the students to the concept of the One to One Laptop Programme said the delay of a January implementation of the programme would bring added benefits to the students.

“We had then indicated to them that the laptop programme would have come on stream shortly and they would have received their laptops. However, those who are responsible for the implementation of the programme looked at the devise again and they in their wisdom and from their training they sought to improve upon the device that we introduced to the general public.

“From what has been said this morning, it would appear that we have improved on the computer that we had introduced to the students last year…They would eventually get a better computer in order to deal with their educational and personal development. The students of Nevis would be in a better position, since they would get a more advanced computer. I believe that the wait has been, in the end, a wait that they will say we waited but we received something better than what was originally introduced to us,” he said.