He said it was a symbolic gesture that was repeated in all three Secondary Schools on Nevis but by November, fifth formers would each receive a Tablet PC while the remaining students from Form 1- 4 would each receive one by the end of the school year. 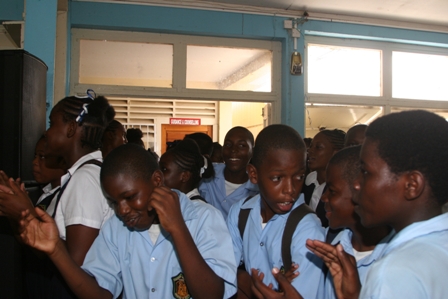 Students of the Charlestown Secondary School react to the news from Minister of Justice and Legal Affairs and Attorney General in the Federal Government Hon. Patrice Nisbett that they would each receive a new Tablet PC

“We want you to use the computer to improve your performance. You are already doing well and we believe with the computer you will be able to do better as a student here at CSS,” he said.

“We want you to use this computer as a tool to further your education and to be in a better position to do your necessary SBAs and whatever assignments that you may have to do in your course of study,” he said.

According to Mr. Nisbett, the computers were built with a GPS safety feature, Wi-fi capabilities and undesirable websites could not be accessed. The computer had a 1.66GHz processor, a 250GB hard drive and 2GB of memory. It had two USB ports and an Ethernet port. The operating system was the educational based system of Eubuntu. In terms of the display, the screen was about 10 inches with similar widths to the Kindle and the iPad.

The Legal Affairs Minister described the Tablet PC as a next generation computer which was unlike the traditional laptop. 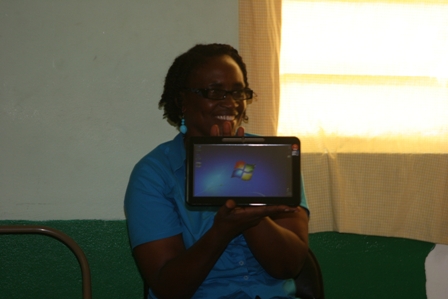