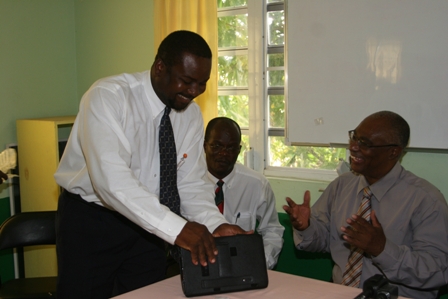 (L-R) Principal of the Lyn Jeffers Secondary School Mr. Keith Glasgow opening the Tablet PC while Federal Minister of Justice and Legal Affairs Hon. Patrice Nisbett and Premier of Nevis and Minister of Education Hon. Joseph Parry look on
CHARLESTOWN NEVIS (September 21, 2010) — Students at the three secondary schools on Nevis could not contain their elation on Friday, when they got a glimpse of the Tablet Personal Computers they would receive as gifts from the Federal Government during the 2010/11 academic school year.

Three computers were presented to Premier of Nevis and Minister of Education Hon. Joseph Parry by Federal Minister of Justice and Legal Affairs and Attorney General Hon. Patrice Nisbett. Mr. Parry in turn handed one each to the principals of the Lyn Jeffers, Charlestown and Gingerland Secondary Schools at their schools.

In brief remarks, the Premier told students and staff of the various schools, that the Nevis Island Administration (NIA) had taken steps to ensure that students on Nevis would benefit from the initiative of Prime Minister Hon. Denzil Douglas.  The initial plan was to provide a personal computer free of cost to each secondary school student on St. Kitts. 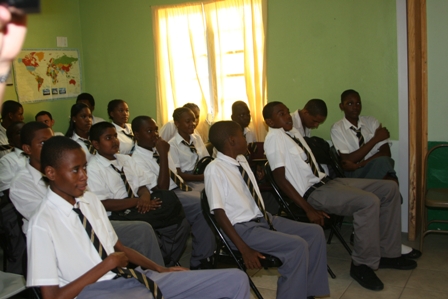 “I am pleased that the Prime Minister has kept his promise. I am also to thank the Government of Taiwan. The first set of computers will be available to the fifth formers in November and over time all the other students will benefit,” he said.

Mr. Parry told the students that he believed the computers would enhance their performance and congratulated them for their good results in the last academic year. He also urged them to care for the equipment and to keep them safe.

The Premier used the opportunity to announce that the NIA was in the process of working on a system through which students would be able to access the internet free of cost but ultimately the computer had to be used as a learning tool.

“We want all of you to use the computer as a tool to further and develop your education. Education is the key to success and this is why we are taking these steps to make sure you are particularly armed,” he said. 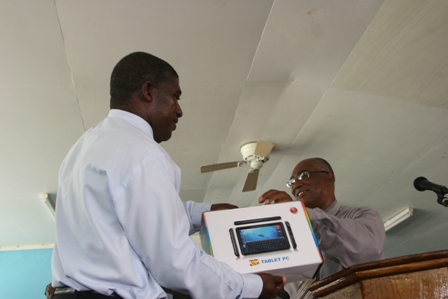 Notwithstanding, Mr. Parry had special words for the students and staff of the Lyn Jeffers Secondary School and reminded them that the NIA had invested in them even though the school was a private institution

He told the students that their level of success was dependant on them and they would have to determine what their priorities were and how much effort they would be willing to put in their studies to succeed. 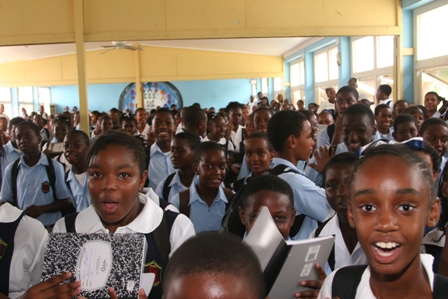 “Let me make this last point to you, it does not matter how bright you are you must study; it doesn’t not matter how bright you are you have to do the work. You have to be exposed to the work and let me say this: it is not always the brightest who reaches first. Quite often are those who know their limitations and are prepared to go the extra mile that end up being first. That is the way of the world, that is the way of life so will it be right in this school,” he said.

Also present during the distributions were Permanent sScretary in the Ministry of Education on Nevis Mr. Joseph Wilshire and Cabinet Secretary Mr. Ashley Farrell who chaired the events.