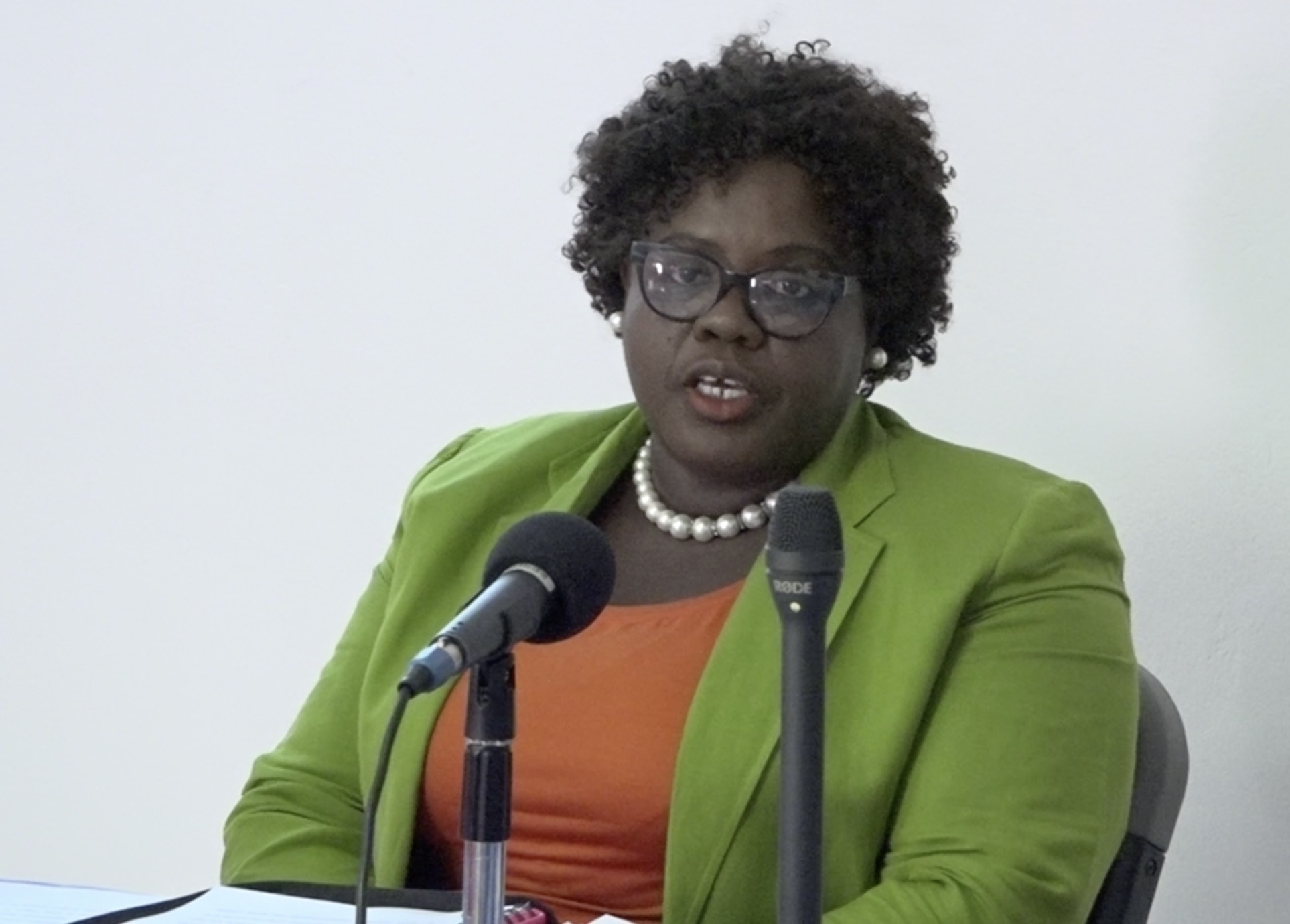 Hon. Hazel Brandy Williams, Junior Minister responsible for Gender Affairs in the Nevis Island Administration delivering remarks at the closing ceremony for a Business Boot Camp hosted by the Gender Affairs Division on August 12, 2020, at the GMBC Building in Charlestown

NIA CHARLESTOWN NEVIS (August 13, 2020) — Eleven women and three men, participants in a six-week Business Boot Camp hosted by the Gender Affairs Division on Nevis, are now better placed to open up and head their own business successfully.

The intensive training session commenced in early July and ended with the official closing ceremony on August 12, 2020 at the GMBC Building in Charlestown. Hon. Hazel Brandy-Williams, Junior Minister with responsibility for Gender Affairs in the Nevis Island Administration (NIA), in her remarks at the ceremony expressed satisfaction with those who participated and the organisers.

“Ladies and gentlemen, I am very proud of you, and I am proud of the workers at the Department of Gender for seeing this very important initiative to completion. I wish you every success in your business endeavours,” she said.

As she celebrated their achievement, the Minister of Gender Affairs described the boot camp as one designed to motivate and influence the participants.

“I say ‘inspirational’ because it is obvious that you have been inspired to think bigger, dig deeper and aim higher. ‘Impactful,’ because of the efforts of your facilitators you have been solidly equipped to engage the business world, touch the lives of others and transform your own life,” she said.

Mrs. Brandy-Williams, who is the brainchild behind the boot camp, said it was initially geared towards women, however, as the department’s mandate is to enhance the coexistence of both men and women through gender equality, both were invited to participate but women outnumbered the men in the 14-member group.

She underscored the importance of women entrepreneurs and their significance to families and men.

“Female entrepreneurship is of great significance because when a woman is empowered enough to conceptualise a business idea, turn that idea into a plan, then make a plan a successful and sustainable business, it gives her a sense of purpose and high esteem, as well as it improves the quality of her life and the life of her family members.

“I want to say to you men, it is very important that women are earning. It makes life easier for you the men. You bring in 50 percent; they bring 50 percent. That’s all 100 percent. So that’s all the more reason why we have to ensure that men and women are a part of this training. So this afternoon I want to say congratulations to those of you who would have participated in this very important boot camp. Go out there and make your business work,” she said.

Mrs. Brandy-Williams reminded the participants that with their new knowledge, they would be in a better position to access funding through the Small Enterprise Development Unit (SEDU) in the Ministry of Finance.

“Funds are made available at SEDU and one of the components of this training is that when you go to SEDU to approach them for a loan, it should make it easier for you to access the loan because you could prove to them now that you have a business plan, you have some business idea, and you have the acumen now to start and run your own business…One of the preconditions of securing the loan is that you would have attended this important boot camp,” she said.

The Business Boot Camp is the first of two planned for 2020 due to the interest shown. The training for a second batch of applicants will commence shortly.