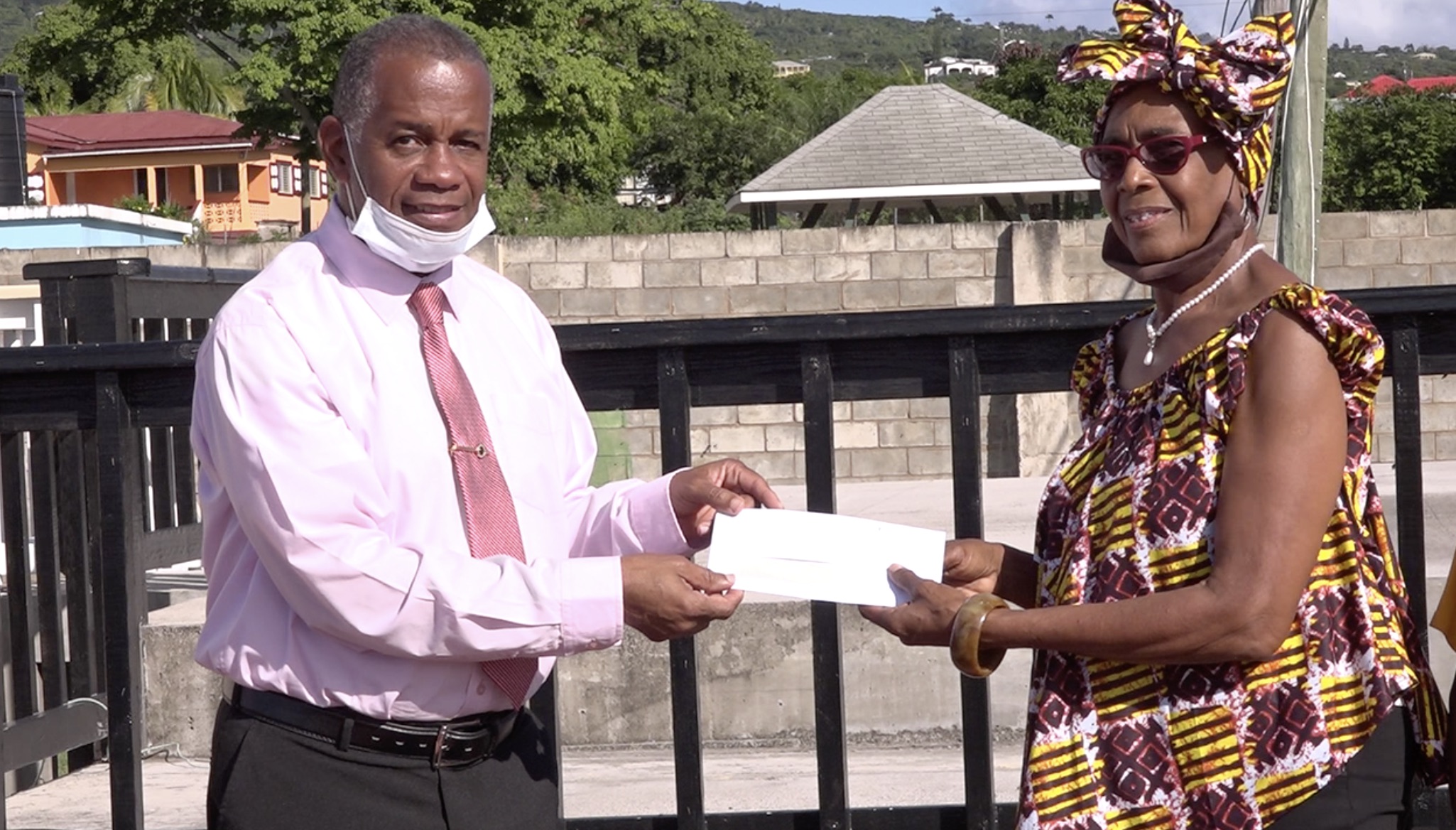 Hon. Eric Evelyn, Minister of Culture on Nevis accepting a monetary donation from Mrs. Gloria Anslyn, on behalf of the first Culturama Committee at the Cultural Complex in Charlestown on December 02, 2020

NIA CHARLESTOWN NEVIS (December 08, 2020) — Hon. Eric Evelyn, Minister of Culture in the Nevis Island Administration (NIA) thanked members of the first Culturama Committee, for a monetary donation to be used as stipulated on the Cultural Complex.

Mrs. Gloria Anslyn representing the committee and Ms. Irma Johnson of the defunct Nevis Dramatic and Cultural Society (NEDACS), handed over the donation to Mr. Evelyn at a simple ceremony at the Complex on December 02, 2020.

“We are happy that the committee…would have seen it fit to partner with us and to make this donation, so at least we could continue the enhancements here at the Nevis Cultural Complex.

“So on behalf of the Ministry of Culture, on behalf of the Executive Director and the Culturama Secretariat in general, we want to say a hearty thank you to these two lovely ladies, these two evergreen ladies Gloria Anslyn and Irma Johnson, for coming and representing the rest of the organisation and making this very timely donation. Ladies thank you very much and please take our gratitude back to the rest of the committee,” he said.

The Minister of Culture described the donation as a timely one which would be used in an area at the complex where enhancements were done in 2019.

“We would have done a little bit of work here at the back where we call the Culturama Longue. Now, we have decided in conjunction with the donors [and] the Nevis Culturama Committee that we will use these funds that we have received…to put towards the covering of the Culturama Longue…

“The funds that we are receiving will not be able to do the entire project. However, the Department and the Ministry of Culture will endeavour to put the additional funds to ensure that the longue is covered,” he said.

Mr. Evelyn noted that on completion of the project, the contributions to Culturama by NEDACS, who established the festival, and the first Culturama Committee would be honoured.

“What we will do when we have the Culturama Longue completed, we will name the longue after NEDACS and the first Culturama Committee. So in essence the name of NEDACS will live on. Of course, it is important that we know the genesis of the festival, and it is important we know that NEDACS was right there from the start and it was from the work of NEDACS why we have such a fantastic festival now called Culturama,” he said.

Ms. Johnson explained the reason for the donation.

“As a member of the NEDACS, and the first Culturama Committee… we are here to hand over some monies that was realised from our last Culturama in 1989. It was placed at the First Caribbean Bank, Charlestown, but on account of their closing we are now handing it over to the Minister of Culture to be used as see fit on this complex,” she said.

Culturama was created by NEDACS in an effort to revive the dying traditional customs of Nevis; to stimulate an interest in the wealth of the islands’ cultural heritage; to create a climate in which Nevisian indigenous folk art could reassert itself and flourish; and to raise funds for the construction of a community centre to serve as a base for the projection and cultural awareness programmes.

Mr. Antonio “Abonaty” Liburd, Executive Director of Culturama was also present at the handing over.