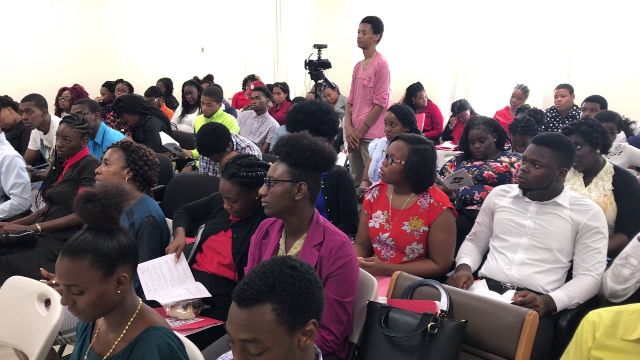 A section of participants at the Department of Labour’s first Job Fair for youths on Nevis at the Social Security’s conference room at Pinney’s Estate on July 05, 2018

NIA CHARLESTOWN NEVIS (July 11, 2018) — The first Job Fair targeting young people, hosted by the Department of Labour on Nevis, is being hailed as a success.The one-day forum was held with the theme “Preparing our Youths for the World of Work” on July 05, 2018, at the Social Security conference room at Pinney’s Estate.

“It met our expectations. In fact I think it surpassed our expectations… We had about 130 in attendance. Out of that, there were 70 who were school leavers from 4th, 5th, 6th forms. So far we would have placed five of these persons and over the next couple of weeks, we are hoping that the next 70 persons we could expose them to some on-the-job training.

“I think they were very interested in what we had to say and the information we put forward was well received from the interactions we saw with different presenters throughout the day,” he said.

The Chief Labour Officer said the Department was aware of concerns raised by members of the private and public sector regarding the youth’s readiness for the world of work and they set out to address the matter.

“Most employers are saying that the young generation entering the world of work, when it comes to their attitude towards work, in terms of punctuality and work ethics, there is cause for concern.

“So this is our way of addressing this issue and imparting knowledge on the youths and basically letting them know what are their responsibilities in going out to work,” he said.

Mr. Liburd expressed hope that for the second edition of the Job Fair in 2019, there would be additional information offered to the youths including representatives from colleges and funding agencies, career guidance and expose them to employment and training simultaneously.

Meantime, at the event’s opening ceremony, Hon. Spencer Brand, Minister responsible for Labour, said the Job Fair signalled the Nevis Island Administration’s (NIA) commitment, along with the department, to offer a vibrant and valued space for the young people of Nevis in today’s job market.

He said the fair had come at a time when the youths are contemplating their future career paths and the employment options available to them, and when they would leave the shelter of their schools and the comfort of their parent’s home to venture into the world of work.

The minister told the participants that today’s job market has become increasingly competitive and therefore they must make themselves marketable and attractive to the employer so they will be seen as the cream of the crop and a cut above the rest.

He told them by the end of the fair they should no longer view themselves as students or school leavers but as young professionals and their conduct should complement and correspond with the new status with which they would leave the forum.

Mr. Brand also used the opportunity to commend the Department of Labour and all who partnered with them to make the Job Fair a reality.