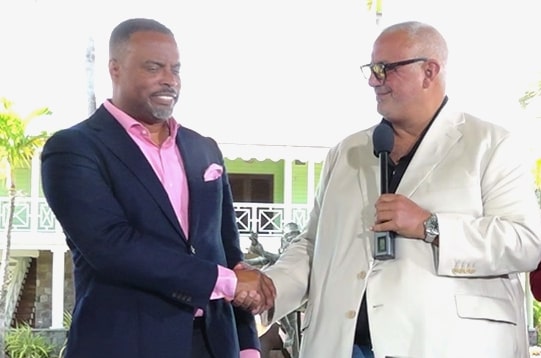 Mr. Philippe Martinez, producer with the UK-based MSR Media thanks Hon. Mark Brantley, Premier of Nevis, for his support of the non-national community on Nevis (March 23, 2022)

He said being an immigrant himself, he had been disheartened to learn of the disparaging comments that were made on social media about the Premier’s attendance at the recently-held Phagwah celebrations of the Hindu community on Nevis, and members of the Guyanese community. According to Mr. Martinez a member of his MSR staff who is a national of Guyana said the local Guyanese community was saddened over the comments made about their tradition and culture.

“Mark, you have defended them, you have honoured them, for this I salute you, and I respect you. I’ve been an immigrant for 34 years. We are all immigrants at some stage of our life. Every immigrant that works here brings a contribution to this island because we love this island. All of us here are working to build an industry in Nevis, all of us have put passion,” he said at a recent media engagement.

Premier Brantley thanked Mr. Martinez for speaking out on the issue and coming to the defense of the Guyanese community and other foreigners making Nevis their home. He reiterated his credo that the contribution of nationals from the Caribbean region and further afield are welcomed and appreciated by right-thinking Nevisians.

“All of us have been immigrants at some point and I’m happy to hear Philippe that you have been an immigrant for 34 years. I hope you settle in Nevis and so your nomadic ways can be ended.

“We are appreciative of all who come here and all who make this island their home and to all who want to come and contribute. Ultimately our people live all around the world, making their contribution in different places- the UK, the US, and all around the Caribbean, and so we ought to welcome each other and welcome people who are willing to make a contribution. I thank each and every one of you here, I know you are from disparate places in the region and the world, I thank you for being here and contributing to the development of this island that we all love.”

Martinez’s UK-based film and TV production company has made significant investment in the island and its people since establishing a presence on Nevis in January 2021. MSR Media’s partnership with the Nevis Island Administration (NIA) established a film industry on the island and the Federation of St. Kitts and Nevis that has resulted in the production of four feature movies, with a fifth one currently in production, and the hiring and training of a number of locals.