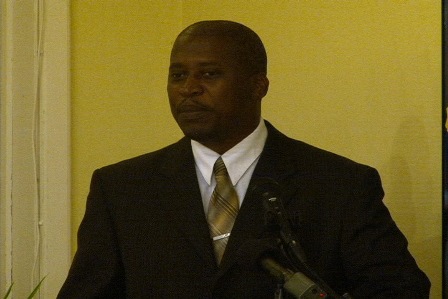 CHARLESTOWN NEVIS (September 08, 2010) — General Manager of the Nevis Electricity Company Ltd. Mr. Cartwright Farrell, said the Company had achieved much in its 10-year operation but would continue to make bold moves to improve the quality of  its service to consumers on the island.

Mr. Farrell gave the commitment of his Company’s continued improve service at the 10th Anniversary Dinner and Awards ceremony at Mount Nevis on Friday.

“Renewable energy in all of its practical forms will be a priority. Smart grid and smart metering are inevitable. SCADA [Supervisory Control and Data Acquisition] is just around the corner. The G/S will become part of our system and every step of the way training of our staff will be foremost.

“We will continue to enhance the safety and comfort of our workers, as we provide the tools for them to perform. We will reduce losses to single digit percentage and at this time it is about 17 percent. We will keep looking for better ways of doing our job,” he said.

However, the General Manager said much had been achieved in the 10 year existence of NEVLEC and pointed to the more reliable electricity supply enjoyed by consumers. He noted that investors could also be more confident today in the stability of the supply.

With regard to the staff compliment, half of which had been employed by the Company since its inception in 2000, Mr. Farrell said a Pension Plan had been put in place for the benefit of workers who had joined the Company from what was the Electricity Department, administered by the Nevis Island Administration.

“During the old Administration, in terms of the Electricity Department when we were part of government, there was no pension plan set aside for them. Under NEVLEC we have put together a pension plan with health benefits,” he said.

Also in the past 10 years Mr. Farrell said offices and various sites had been interconnected by fibre optic cable, staff had received more extensive training and above all the Company’s top and Departmental structures were managed by 100 percent local personnel.

He also spoke of the Pole Numbering System that was introduced to assist with quick response which he indicated had caught the imagination of all on the island. NEVLEC he said had become synonymous with good work.

Notwithstanding, Mr. Farrell said the Company would continue to strive to become known for excellent work

“The way forward for us now is to become known for excellent work. Our customer Service has to improve within the offices and on the road. We need to learn the need for swift response and I temper that by saying congratulations to those who so ably and swiftly returned the power to Nevis after the last storm. However, we must be more vigilant in our maintenance regime.

“Our attitude towards the Company must improve. We must bear in mind that NEVLEC’s health is our health. We need to understand that individual efforts must come together to determine the performance of NEVLEC,” he said.

In conclusion The NEVLEC General Manager expressed the view, that the Company had become a leading organisation in Nevis and the Caribbean but nonetheless would seek to continue its advancement towards the cutting edge and to satisfy an ever more demanding consumer.