Junior Minister with responsibility for Natural Resources and the Environment in the Nevis Island Administration Hon. Carlisle Powell

CHARLESTOWN NEVIS (February 22, 2010) — Nevis continues to be at the forefront of renewable energy development in the Caribbean, an achievement Junior Minister with responsible for Natural Resources and the Environment Hon. Carlisle Powell said the Nevis Island Government was proud of.

Mr. Powell’s statement came on Wednesday during a field visit with other members of Cabinet, to the site of the Maddens Wind Farm, a development by WindWatt (Nevis Ltd.), a family owned and operated wind energy developer based in Canada.

“We have had a tremendous amount of talk from St. Lucia, St. Vincent from St. Kitts even where they are planning an 8 megawatt wind farm but to the best of my knowledge there is none which has actually started. In Nevis we have done more than start we have the equipment on site we have laid out the site already so we are on the way.

“Once again Nevis is leading and we are quite happy to lead. Of course I should also add that the WindWatt Group they have always expressed the desire to expand not only within Nevis in terms of expanding the farm in Nevis to produce more power but they are also keen to expand to other islands,” he told the Department of Information in an interview.

According to Mr. Powell, renewable energy was something that the whole world was showing renewed interest in and the Nevis Island Administration was pleased to be positioned to be able to add wind into the geothermal mix to be able to speedily reduce the use of fossil fuels.

In July 14th, 2009, the NIA had granted WindWatt permission to harness wind energy for the provision of 1.1 megawatts of renewable power to the Nevis Electricity Company Ltd. (NEVLEC) by mid 2010.

Commenting on the progress of the wind farm, Mr. Powell said the NIA was pleased with the ongoing work and it had gone as well as they were informed it would be. 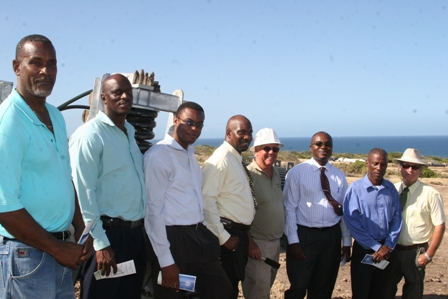 Members of Cabinet in the Nevis Island Administration, led by Junior Minister (fourth from left) with responsibility for Natural Resources and the Environment Hon. Carlisle Powell on a site visit of the Maddens Wind Farm. They are accompanied by Permanent Secretary in the Ministry of Natural Resources and the Environment Mr. Ernie Stapleton (third from right) WindWatt’s Staff Electrical Specialist Mr. Peter Haxamer (fourth from right) and Businessman Mr. Clinton Willett (extreme left)

“We now anticipate that the pads would be laid, that the full length of the turbine all 55 meters will be installed and that the gear and the housing mechanism will be placed. That by June we will be able to have testing completed and we will have the 1.1 megawatts of power into the NEVLEC grid, so that the whole of Nevis would be able to enjoy the wind farm and wind power,” he said.

In response to a question on the impact of wind energy on the existing fuel surcharge, Mr. Powell explained that there would be some benefit since the wind turbines did not have to rely on fossil fuel to produce energy.

“With wind energy, it is a renewable form of energy we don’t have to use any oils to produce the power. So what it means is that with 1.1 megawatts, we have a base load of about a little over 6 megawatts of power so it means wind would be contributing about 1/6th of the base load in Nevis.