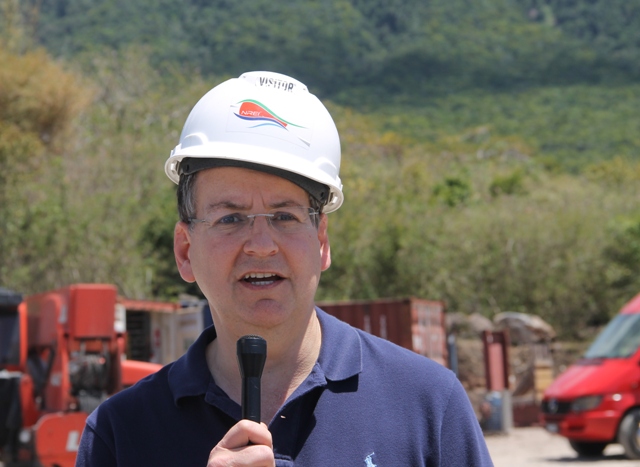 Mr. Daniel Pfeffer, President of Thermal Energy Partners the parent company of Nevis Renewable Energy International, who are contracted by the Nevis Island Administration to develop the island’s geothermal resource

NIA CHARLESTOWN NEVIS (April 05, 2018) — Geothermal developers on Nevis say they are seeking to expand the local workforce in Phase 2 of the Geothermal Development Project when work commences at Hamilton Estate in the next few months.

“We would like to encourage everybody to go to our website: www.cleanpowernevis.com … if you are interested in working on the project, and that’s the big project which we hope will start early this summer, we would encourage you to submit resumes and any other information about yourself…

“We will have 60 people on this site when we start to construct. Our hope is that, most of these people are from Nevis…go to our website and register and we encourage you to do that…that’s how we’ve been finding most of our qualified workers,” he said.

Mr. Pfeffer said they were satisfied with the five locals hired for the first phase of the project and the company is seeking to tap into the local workforce for the other phases.

“They have more than met our expectations. We have found an eagerness to learn, an eagerness to work which is very, very rare. We have had absolutely no problems at all. In fact it has really encouraged us,” he said.

The TEP President stated that one of the mantras of the company and a key requirement is, once an outside contractor is hired, they have to utilise qualified labour on the island before employing other persons from outside.

He said since the project started, the company has partnered with qualified local contractors and employed locals and they will continue to do so moving into the next stage of the project.

The first phase of the geothermal project to drill a test well, commenced at the Hamilton site late November 2017.

At a ribbon cutting ceremony to mark the occasion, then Acting Premier of Nevis Hon. Mark Brantley, told the six local workers that the opportunity to work with the project would help with their personal development.

“We are going to have some transfer of skills. It means that six youngsters who are here will now know about geothermal, know about drilling and as we feel the rest of the Caribbean will take pattern from Nevis, it means that they will have a skill that is exportable and that in time, they themselves might be elsewhere working on drill rigs and working to make geothermal projects a reality elsewhere,” he said.

Mr. Brantley noted that Nevis was not alone in its quest for geothermal energy and pointed to the other islands of Dominica, St. Lucia and Montserrat and Guadeloupe which already has an existing geothermal plant.

The Nevis Island Administration (NIA) contracted NREI to develop the island’s geothermal resource. The project is slated to be completed in 2019.