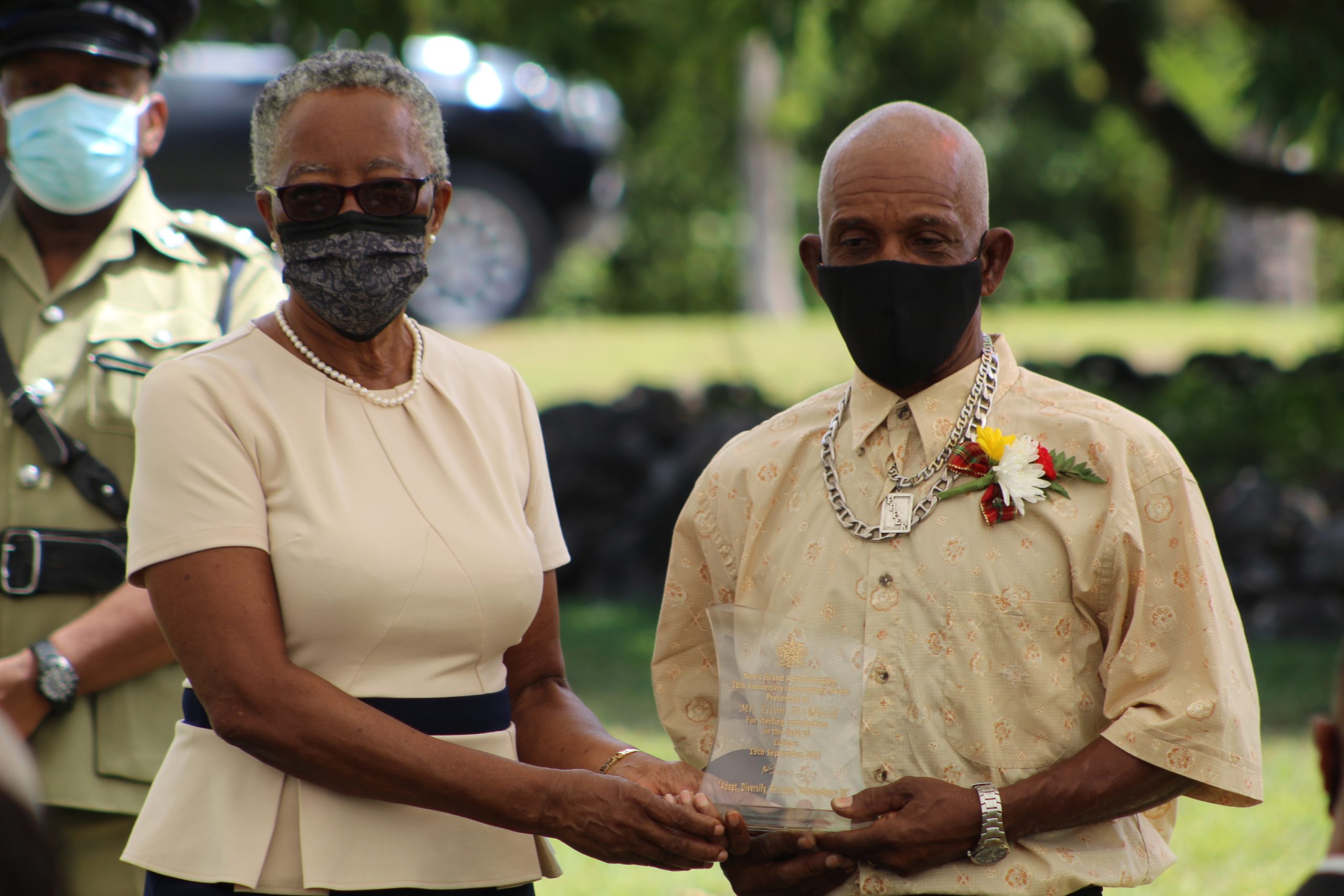 Her Honour Mrs. Hyleeta Liburd, Deputy Governor General in Nevis presenting a plaque to Mr. Orville Hendrickson on behalf of Independence Day honoree Mr. Elton Archibald for his contribution to Culture at an Awards Ceremony at Government House on September 20, 2021, on the occasion of the 38th Anniversary of the Independence of St. Christopher and Nevis

NIA CHARLESTOWN NEVIS (October 05, 2021) — Mr. Elton Archibald of Rawlins Village in Gingerland, referred to as one of Nevis’ cultural icons was honoured for his contribution to Culture, during the recent celebration of the 38th Anniversary of the Independence of St. Christopher and Nevis.

During an Awards Ceremony held at Government House on September 20, 2021, Mr. Archibald, the Independence Day honoree, was presented with a plaque by Her Honour Mrs. Hyleeta Liburd, Deputy Governor General in Nevis. It was accepted on his behalf by his caregiver Mr. Orville Hendrickson.

Mr. Archibald was born to Mr. and Mrs. Austin and Matilda Archibald in January 28, 1942, and grew up in Rawlins Village. He was raised by his grandmother having lost his mother at an early age.

He recalls being invited by renowned fifer Mr. David Freeman, at an early age, to become a member of the now celebrated Honey Bees String Band.

According to his profile, Mr. Archibald took to playing the guiro and taught himself to perfect the art of its unique percussion, and continued to add his mastery of the instrument to the sweet rhythms of the Honey Bees String Band.

He fondly recalls a trip to Cuba in 1980 to perform and subsequently to other countries as far north as Canada and as far south as Trinidad, including neighbouring islands.

During his time, he said the Honey Bees String Band captivated audiences in St. Kitts, Montserrat, St. Eustatius and Tortola.  Locally, the band made frequent appearances at hotels and cultural events to the delight of both locals and visitors.

“From Cliff Dwellers to Golden Rock, from Nisbett’s to Four Seasons, vacations were made more memorable as the unforgettable, titillating sounds the fife, banjo, cuatro, guitar, bajo, triangle and Elton’s guiro unhinged inhibitions and freed feet on the dance floor,” his profile said.

In 2018, the same year that his friend and band leader Mr. David Freeman passed away, Mr. Archibald decided to lay down his guiro and retired from being an active member of the Honey Bees String Band.

Mr. Archibald continues to be remembered as one who was involved in the preservation of the heritage of St. Kitts and Nevis and enriching the islands’ culture worldwide.