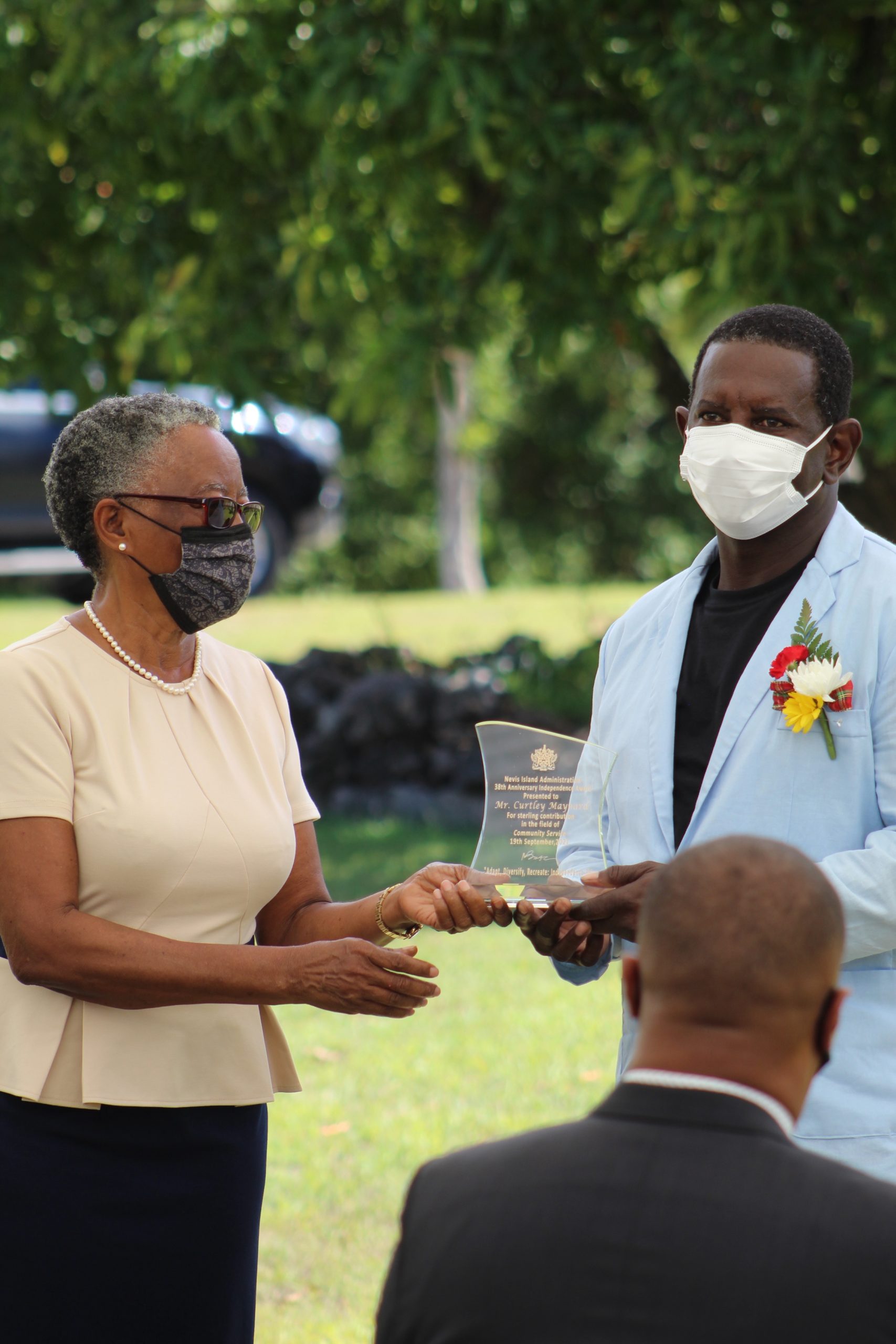 Mr. Curtley Maynard of Gingerland receiving a plaque from Her Honour Mrs Hyleeta Liburd for his contribution to the development of Music at an Awards Ceremony on September 20, 2021, at an Awards Ceremony at Government House on the occasion of the 38th Anniversary of Independence of St. Christopher and Nevis

NIA CHARLESTOWN NEVIS (October 06, 2021) — Mr. Curtley Maynard, a musician from Gingerland is another Nevisian who was honoured during the 38th Anniversary of the Independence of St. Christopher and Nevis.

He was presented with a plaque by Her Honour Mrs. Hyleeta Liburd for his contribution in the area of Music to mark the occasion, at an Awards Ceremony at Government House on September 20, 2021.

At the age of eight his love for music was evident since he started making his own guitars. By the age of 13, however, recognising his interest, his mother bought him his first box guitar and he and his gift became inseparable.

He learned to play by looking at other guitarists around his village including the Mighty Gero and Donald Hendrickson, and later attended Lanny Dore’s music school to study a more theoretical approach to music.

Young Maynard’s first performance at the age of 16 at a Christmas programme, at the Prospect Primary School was with Lanny Dore’s Band.

Though young, he was a notably talented budding musician and as such was often asked to play with other groups as well as in church throughout his teenage years.

Mr. Maynard was later sought by Mr. Masefield Nisbett and played with Nisbett’s Eclipse Band in the 1980s, an opportunity for which he remains grateful, which afforded him the opportunity to perform on stage along with older musicians.

His excitement at this accomplishment led him to do something he had always dreamt of doing and in 1987 at the age of 20, he began his own band called “Kasanova.”

The band members included two of his younger brothers, Carlisle and Andy Maynard along with Sylvester Percival.  Mr. Vaughn Walters was the band’s manager.

Kasanova grew to become a much-loved home-grown band from Gingerland then which produced many albums with hit songs including “Big Bamboo”, “Poor Man’s Cry”, “Rock the House”, and “Long Jam” an infectious tune which pioneered the idea of revellers jamming from Gingerland to Charlestown. The “long jam” as it is popularly known today was started by Curtley’s band in 1989, and has become a permanent fixture of the Culturama Emancipation J’ouvert jump up.

His band has done hundreds of live performances locally and has also performed overseas.

Mr. Maynard is also a song writer and arranger, his music is featured on radio stations locally, regionally and internationally and it can be accessed on YouTube.

At present, the renowned Gingerland musician is a guitarist for the All Star Calypso Band, local singer “Garlic”; the Upper Level Band and the Kasanova Band.

His expertise with his guitar has helped to shape and perfect the sounds of many local songs. He is and will always be remembered as a true Nevis musician for his contribution to the development of music on Nevis for his inspiration and innovation.