Avigilon’s Director of Sales for the Deep South USA and the Caribbean Mr. Gary Tryon speaking with Nevis Television at the Four Seasons Resort on October 25, 2013

NIA CHARLESTOWN NEVIS (October 29, 2013) — A representative from a Canadian-based company which specialises in High Definition (HD) surveillance cameras believes that the installation of those security devices on Nevis would be of immense benefit to the island.

Avigilon’s Director of Sales for the Deep South USA and the Caribbean Mr. Gary Tryon made the comment in an invited response in an interview with the Department of Information on October 25, 2013. He was at the time conducting a session with several members of the local business community at the Four Seasons Resort on Nevis.

“I think something like this could be beneficial to Nevis. I think it will be hugely beneficial in something as simple as being able to solve a simple crime, keep neighbourhoods safer and different things like that that are needed just about any place that you go,” he said.

Mr. Tryon who led a two member delegation, explained that his visit to Nevis was because of an invitation from the Administration who had interest in the security systems.

“We actually showed up at the invitation of the Nevis Island Administration who called us about 10 days ago and told us they had heard about our cameras and asked if it was possible for us to come down here and do a demonstration. So myself and another gentleman who works with me at Avigilon we arrived on Tuesday evening, we met with the government officials, we worked out a game plan to go to strategic locations on the island and record some video,” he said.

According to Mr. Tryon, they spent about 12 ½ to13 hours on Wednesday and captured video and about another 10 hours on Thursday following which they accommodated a meeting with government officials and later members of the business community.

“They were extremely impressed with that. This afternoon we invited local business members and also took a look at the video to see how it worked and we have done demonstrations of video from the port, video from over two miles away. We were actually over at Sea Bridge, where we looked across the water and could see the island of St. Kitts and see the buildings and people on the beach over there from here.

“We set up at some of your roundabouts and watched cars going by in 10 to 20 miles per hour and caught all the license plates. We set up at the Port and watched the ferry come in and people offload and leave and from about 300 feet away, we could identify everybody, the ship and cargo coming and going. They recorded video that we have shown has been very impressive. It has given a lot of thought to how a better video could help the businesses in their day-to-day needs,” he said.

The Avigilon representative also gave some insight into the company which had been around since 2004 and described it as the fastest-growing software and cyber company in North America ahead of Microsoft, Apple, Twitter, Facebook because of its production of the best recorded video.

“Our company has gotten to where we are by producing the best recorded video. So when you look at a bank or you look at a gas station or a port or an airport and you play the video back and you try to zoom into it and you can tell or see a person’s face clearly or tell what somebody’s done. That’s always a problem and lots of people have cameras and lots of people’s camera systems do not do a very effective job at recording video.

“The live video looks good but the recorded video not-so-good because it’s compressed. Our video doesn’t compress. What you see in the live videos we deliver in the recorded video but we do a little better than that. We can see license plates at night time, we can see stuff hundreds of feet away and zoom in and see a very clear face. We can zoom in and see the serial number on a dollar bill if you need to,” he said. 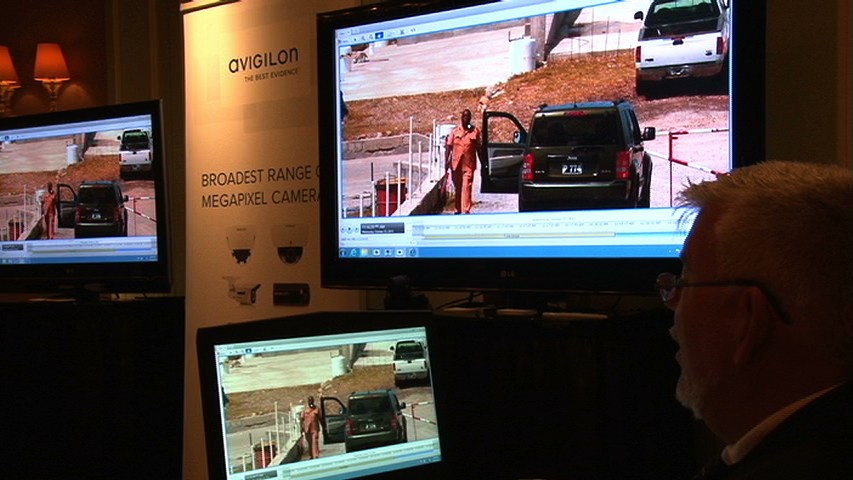 The visit came on the heels of a recent announcement by Premier of Nevis and Minister of Security Hon. Vance Amory at a Conference on the Economy that security would continue to be an important matter in 2014.

“Security is going to be and will continue to be an important part of our thrust of the new year. We have appointed someone to work with the development of the CCTV project.

“We intend also to appoint someone, financing resources being available, to assist in that project because we want to ensure that this is given priority and that our citizens, our residents, our visitors can feel comfortable that they’re coming to a place which respects law and where we make security and safety important aspects of our governance,” he said.