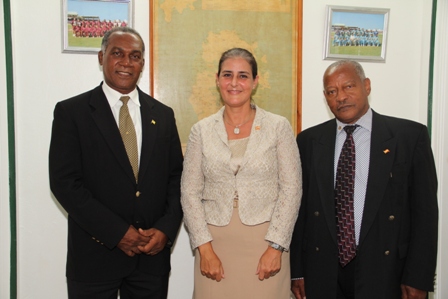 (L-R) Premier of Nevis Hon. Vance Amory, visiting Ambassador of Spain based in Jamaica Her Excellency Mrs. Celsa Nuno and Honorary Consul of Spain based in St. Kitts Mr. Gary Da Silva at the Premier’s Bath Plain office on October 28, 2013
NIA CHARLESTOWN NEVIS (October 28, 2013) — Premier of Nevis Hon. Vance Amory expressed keen interest in an initiative discussed with Ambassador of Spain Her Excellency Mrs. Celsa Nuno when she paid him a courtesy call at his Bath Plain Office on October 28, 2013. The proposal, he explained, would allow for the people of Nevis a greater understanding of the Spanish language.
The Ambassador who is stationed in Kingston, Jamaica, visited Nevis as part of a visit to St. Kitts and Nevis in which she paid courtesy calls on government officials. She is represented in the Federation by Honorary Consul of Spain Mr. Gary Da Silva.
“The Ambassador and I spoke about one initiative particularly and that is how we could get our people to become more au fait with the Spanish language. The Ambassador has agreed and promised to assist in enabling the Nevis Administration, through the Education Department, to have some access to the exposure to the Spanish language.
“It is something that I would really like to see across the board in Nevis, where children would learn to speak the language [and] communicate the language because of our proximity to South America,” Amory said.
While Mr. Amory thanked the Ambassador for her offer of assistance, he also gave some advice to the island’s students and the people of Nevis.
“I want to say to the people of Nevis, I would like to see our people generally beginning with our students in school become very facile with the Spanish language, so that they can communicate effectively because we do business with so many countries which are Spanish-speaking and we have relations with all of them if not most of them Cuba, Dominican Republic and so on.
“I really would like this to be a project which succeeds within the next five years or so. Ambassador, welcome and thank you for your visit…Thank you very much for coming and thanks for your offer of assistance in helping us to acquire the facility of the language,” he said.
The Premier also reminded of the island’s Spanish heritage when it was discovered by Christopher Columbus in 1492.
“Students of History would know that Nevis was discovered by Christopher Columbus, Cristobal Colon, in 1492 and we do have that heritage of which we are proud…
“Sometimes we want to downplay our history but history is just that. It is history. It is a fact and so we want to say to you Ambassador how very proud we are of our heritage and we wish to utilize that Heritage, that link, which we’ve had over history,” he said.
In response, Ambassador Nuno explained that the Caribbean had always held great importance to Spain and as such was not new to the region.
“We are not new in the region, as you know, for historic reasons but also from a political, economic point of view. We are one of the few European countries that has three resident embassies in the non-Spanish-speaking Caribbean. We have a resident embassy in Jamaica, in Port of Spain and in Haiti and I wish we could have a resident Embassy in St. Kitts and Nevis as well,” she said.
The Ambassador also registered her agreement with a partnership in which Spain could work with Nevis to raise awareness on the importance of the Spanish language.
“I do agree that we can work together in raising awareness about the importance of and the usefulness of Spanish for this region because as you mentioned, you are after all surrounded by 350 million Spanish speakers which opens an immense array of possibilities. So I’m looking at Spanish and talking to people about learning Spanish, not for cultural reasons but if you want to look at it for economic reasons.
“I see the opportunities of training that could be offered and that Nevis could take advantage of, precisely because of the region, the geographic position that you hold which is so central among so many countries that you have, as you mentioned, very close relations with. So I’m definitely quite prepared to work with you and do as much as I can,” she said.
According to Ambassador Nuno, the use of technology would serve as a good tool and with the determination and commitment of the people, given there was a large Spanish-speaking community on the island, Nevis was in a position to progress with that initiative.
Regarding the importance of the island’s heritage, she said it offered good potential for tourism.
Meantime, Mr. Da Silva used the opportunity to remind Nevisians of the services offered by his office in Basseterre and urged them to take advantage of the opportunities offered by Spain.
“My office is located at Port Zante and persons who wish to get their Spanish visas can contact me at the office and of course I will work with them ensuring that they get that done.
“In terms of education, I will be working with the Embassy and I hope that we can see some form of training at the Sixth Form here on Nevis by the lecturers and the lecturers themselves also learning some Spanish so they can pass it on to the juniors,” he said.