Mr. Daniel told the Department of Information in a recent interview that the Ministry of Health would endeavour to do all it could to attract students toward careers in health.

“I am going to go to the schools shortly and talk to the young people about careers in health. I keep reminding people [that] a lot of the young people are interested in Accounting and Law and so on, quick bucks professions [but] whatever happens everybody’s arrow points to the hospital,” he said.

The Health Minister also indicated that the NIA would work acidulously with various institutions and governments, to ensure that a development programme for human resources in health which he referred to as vital, was put in place.

Mr. Daniel described the nursing profession and others in the medical field as jobs which were in demand worldwide and as was evident they remained unaffected by the world recession. 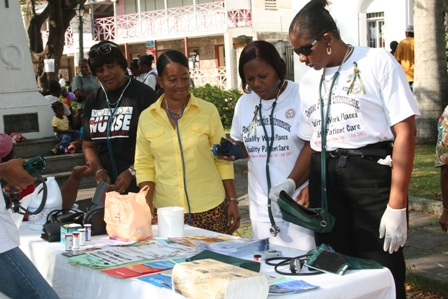 Some of Nevis’ nurses including head nurse at the Alexandra Hospital Matron Aldris Dias (second from right), conducting an outreach programme in Charlestown during Nurses Week. (file photo)

“I say to the young people, people who are nurses never get laid off. In all the economic down turn in the world medical professions are at work because globally there is a shortage of some four million plus professional health care workers, the whole range of professionals… People speak to machines but really it is the human resource capability you need.

“You need doctors, nurses and medical technicians and so that is one of the key areas we are going to be focussing on. We really want the young people to see that being a nurse is spiritually rewarding and in time it will be financially rewarding,” he said.

Mr. Daniel further explained that the NIA was seeking to provide incentive packages for nurses and developing new kinds of approaches to employment.

“Right now we are paying people to study nursing. The persons who are studying nursing at the college in St. Kitts get money from the Ministry of Health every month to study nursing. We have a fund already with $50,000 for the training of nurses, so we pay the nurses to train and that’s unusual,” he said.

The Health Minister pointed to what he called a culture of greed that had emerged in the society which called for plenty now and immediate gratification.

He said that emerging culture had driven persons to look for quick fixes which were profit oriented and no consideration for service and that situation was problematic.

“For instance we have to ask nurses who have done 35 and 36 years of nursing to hang on and stay on. It means that they retire, we pay them their retirement benefits, their gratuity and pensions and then we have to rehire them. So one person we are paying twice and three times and that is not good,” he said.

Mr. Daniel explained that from a nationalistic point of view, he expected that love and loyal support for country and patriotism would rise to a level which allowed persons to acknowledge the need to police, nurse and teach themselves. Yet all three of those areas of service remained lagging on Nevis.