Charlestown, Nevis(Wednesday, April 11, 2012)–Premier, Hon. Joseph Parry, the area representative  for St. Thomas’ parish, is sponsoring  a visit to the St. Kitts  Marriott Hotel by the victorious  2012  Gulf Insurance Inter-Primary Schools champions, the St. Thomas Primary. What could have turned out to be a rather embarrassing situation of dashed expectations for the newly crowned Gulf Insurance Primary Schools athletics champions, was gracefully averted by  the Hon. Joseph Parry, when he stepped in to save the day.

Unknown to him, information had reached the athletes that if they won the coveted title for the first time in its 30-year history, they would be taken to the St. Kitts Marriott Resort by the Premier.

With that in mind and the determination to win, the athletes from the “Green Machine” defied all odds creating the biggest upset in the history of  the Games(April 4) by denying defending champions Joycelyn Liburd Primary a ‘three-peat”,  and beating perennial champions, Charlestown Primary into second place.

Thursday (April 5) I was on my way to work, and they (pupils at the St. Thomas Primary School) signaled to me that I had to come into the school”,  recalled the Premier on Tuesday, April 10 while speaking on his live radio program, In Touch With the Premier, on Choice 105.3 FM and other radio stations in the Federation.

“I went in there and made a little impromptu speech, and one little boy came to me and said ‘is it true that you are taking us to the Marriott?’” said the Premier. “First let me say I never promised anybody that I was taking them to the Marriott”, the Premier said he responded.

He said that somebody who sincerely wanted the children to win would have told them that either the Premier or somebody would take them to the Marriott if they won. Faced with such a situation, the Premier said as a leader that he could not walk away from such high expectations.

Accordingly, he said that there was no choice but to offer a sum of money to the school’s principal, Ms.Norlene Smithen, on behalf of all the athletes, and advised that if they wished to go to the Marriott for a day, that they could go. He, however, advised that it was not a good thing for anyone to use those kinds of incentives to influence the performance levels.

Parry reaffirmed it was his wish for people to be able to perform because of the love of the sport and spirit of competition, because they understand it helps their bodies and minds, adding that it was good and healthy. He advised that in the future, when anyone is trying to motivate people, they should find the right kinds of motivations, and not to make promises they could not keep.

“I knew nothing about it (the Marriott promise), but when I remember how those children flagged me on Thursday morning; when I saw the joy, and the thrills of victory, I am left with no choice but to say that a sum of money will be given to the head on behalf of the athletes, and she will do what she thinks best in the interest of the children, that is how I will deal with that,” said Premier Parry. 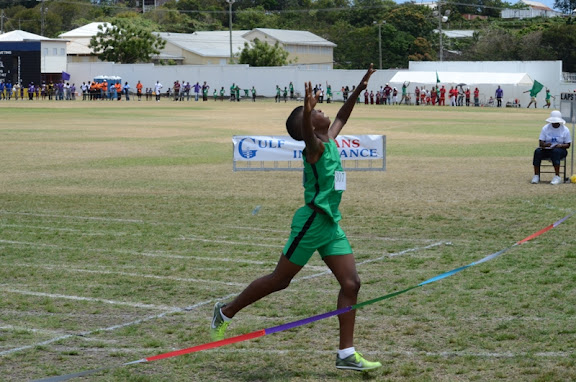 He said that he was happy with the determination the St. Thomas Primary School showed even before the actual meet by training very hard. He congratulated the school’s coaches Mr. Emmanuel “Eddie” Richards and Ms. Jasmine Charles, along with members of the wider community, Mr. Collin Duggins and Mr. Carlos Vanterpool.

“The community can do something that is positive, get away from negative things that lead us astray, andAA get into positive things,” advised Premier Parry. “So, when you saw that determination on the faces of the children, you knew that a lot of work had been done on them, physically and mentally, and this is what I want to recommend to the rest of Nevis.”

He challenged all the primary schools in Nevis to do their best next year as in doing so, they would graduate to take part in high school championships, leading on to CARIFTA and Olympic games. He saluted Mr. Lester Blackett of the Nevis Amateur Athletics Association and his members, and all the teachers who made the Meet the success it was.

“I want to say it was a nice event and Kittitians actually came over and enjoyed themselves tremendously, and there were people in the United States, Taiwan and England, all over the world watching (live streams on the internet) and enjoying the sports,” said Premier Parry.

“It was very well executed and again it is a great credit to the island of Nevis, and I want to say to all of you, thank you.”