(CHARLESTOWN,NEVIS–TUESDAY, MARCH 16TH, 2011)  Premier of Nevis and Leader of the Nevis Reformation Party (NRP) the Hon. Joseph Parry, said the history making  Youth Political Convention on Nevis was the genesis of a decision taken by his NRP-led government, to provide an avenue for the formulation of recommendations related to the well being and empowerment of the young people of Nevis.

The Premier made the comment when he addressed over 200 youths and a host of well wishers at the first ever NRP Youth Arm Convention held on Sunday, March 13th.. It was held at the Occasions Event Center in Pinneys.

“I feel obligated, particularly to the youth, to support their rights and freedoms and to give the hope of a better day and a brighter and prosperous tomorrow,” stated Premier Parry.

During his presentation, the Premier informed the audience that he and his Cabinet treated the 146 students of the Sixth Form College to a lunch at the Mount Nevis Hotel earlier this month, to him the most important part of the day was the meeting with the sixth formers which followed.  He said the students were afforded the opportunity to have open dialogue and speak freely on any topic they desired. 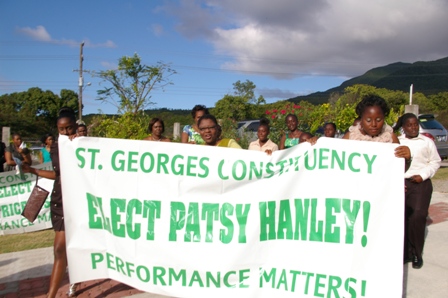 “I must admit that this was one of my greatest pleasures as Premier, to listen and respond to our youths as they articulated their hopes, their dreams and their aspirations for one beloved island of Nevis,” commented the Premier.

The ideas initiated by the youth included, a separation of the Sixth Form College from the Charlestown Secondary School; increasing the number of subjects offered in the preparation for more career choices and head of schools to renew training to deal with new challenges.

Among the many highlights of the afternoon’s event was the address by guest speaker Antigua and Barbuda’s Ambassador to Venezuela, Brazil, Chile and Mexico Her Excellency Ambassador Joan Underwood. During her speech she expressed high admiration for the Joseph Parry led-NIA. 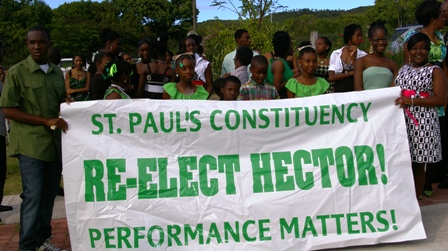 “I received an email listing the NRP accomplishments since taking office in 2006. It was a very long list of accomplishments. I was convinced that either the year 2006 -2011 was wrong or the information was exaggerated.  Certainly no party could have achieved all these things listed in less than five years in office,” exclaimed Ambassador Underwood.

She said she had read Premier Parry’s Budget Speech and was pleased when she saw that early in his speech the Honorable Premier made it clear that the Administration under his leadership was one of action and not talk. Her Excellency Underwood told the audience that, “those are the words of a man who knows that performance matters!

“Under the NRP government did Nevis get better classrooms, better working environment for teachers?” she enquired, to which she received a resounding “yes” from the attentive crowd. 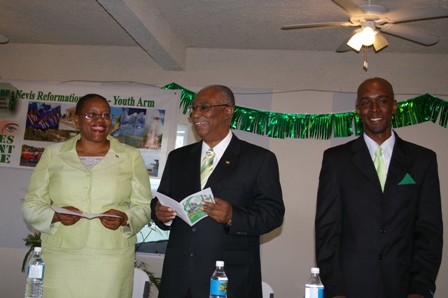 “Did the government give 170 scholarships to young people and did NRP help to ensure that the Four Seasons reopen?”  Again the crowd gleefully responded, “Yes”!

In conclusion Ms. Underwood said, “Wow! The NRP is committed to performance! This party understands and lives by this quotation from Harold S. Geneen…words are words, explanations are explanations, promises are promises but only performance is reality!” 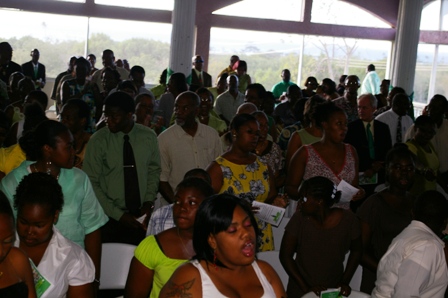 Young people at the convention