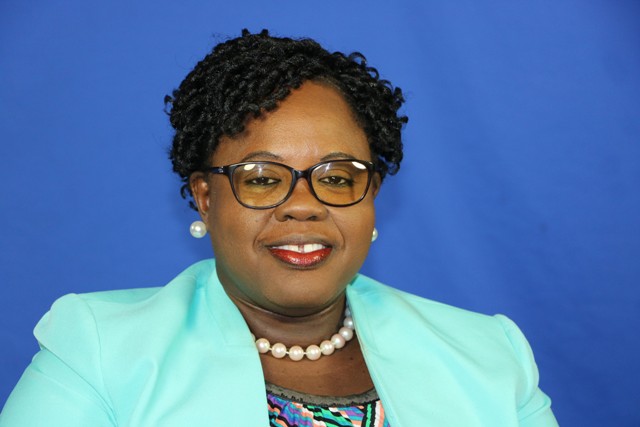 NIA CHARLESTOWN NEVIS (September 25, 2019) — Hon. Hazel Brandy-Williams, Junior Minister of Health and Gender Affairs in the Nevis Island Administration (NIA), left Nevis on September 25, 2019, for Toronto, Canada  where she will be the keynote speaker at the African Women in Leadership Organisation (AWLO) Summit.

The event will be held at the Ontario College for Development Training at the Woodbine Banquet and Convention Centre on September 26 to 29.

At another segment of the event, the VIGOR Unsung Heroes Awards International, which will be held at the same venue on September 29, Mrs. Brandy-Williams will be one of more than 30 awardees, and one of three recipients from the Caribbean region to be honoured.

Before her departure, Mrs. Brandy-Williams expressed her gratitude for the invitation to play a key role at the summit.

“Giving God thanks for using me as his vessel, and I try to do so with great humility. I’m truly humbled by this invitation and would like to place on record my profound thanks to the organizers for putting such confidence in me. I seek only to do my best and hope that my discussions will resonate with those present,” she said.

The AWLO describes itself as an international non-profit organization which was founded in 2009, to drive women’s leadership through gender parity, leadership effectiveness, and global development.

The organisation’s membership comprises of African Women and Women of African Descent, across 23 Chapters and Youth Councils in 12 countries including the United States of America and the United Kingdom.

The AWLO says it strives to advance the status of women in leadership by creating an empowering platform and harnessing the synergies of alliance. AWLO‘s Women Leadership Solutions cut across all sectors, strata, and generations.

Regarding the VIGOR Unsung Awards International, the event is designed to give a platform of recognition to everyday heroes; build a thriving and motivating culture of giving to others; and to inspire individuals in a community to step up and step out making the world a more beautiful place.

The goal is to celebrate, honour, and acknowledge individuals who have made an impact in the world by bringing positive changes to improving, encouraging or empowering other people’s lives.

According to the awardees biography published on the organisation’s website, Hon. Hazel Brandy-Williams is currently the Minister of Health and Gender Affairs of the Nevis Island Administration in the island of St. Christopher and Nevis.  She has a Bachelor of Arts (B.A) in Finance from the University of the Virgin Islands, and a Master’s in Science (MSC) in Risk Management and Financial Services from the University of Glasgow in Scotland.

From 2013 until 2017 she was a Minister with responsibility for the Ministries of Social Development, Youth, Sports, Community Development, Basic Needs Trust Fund (BNTF) Unit and Sustainable Human Development.

Her diverse background and interest in the financial world, along with her community involvement, have made her one of the leading champions for women’s empowerment in her country. She has participated in various international United Nation events and conferences, where she has represented St. Kitts and Nevis. She was elected in June 2018, to coordinate the Caribbean Parliamentary Forum (CPF) to promote, dialogue and foster alliances among Caribbean countries on sexual reproductive health and rights.

Minister Brandy-Williams has organized and executed a number of forums on the Sustainable Development Goals and has established a bi-annual regional forum focusing on the Sustainable Development Goals and the 2030 Agenda.  Her work locally entails the empowerment of youth and women; an advocate for women and housing; optimum health care for all; a champion against domestic violence, abuse.

Mrs. Brandy-Williams’ travels to Canada comes on the heels of her visit to Nairobi, Kenya where she attended the 12th Commonwealth Women’s Affairs Ministers Meeting (WAMM) in Nairobi Kenya, from September 19 to 20, 2019.