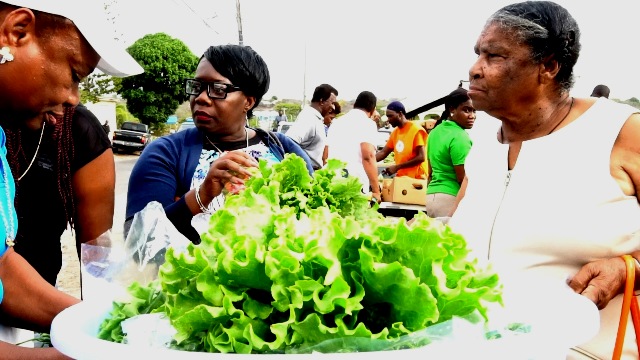 NIA CHARLESTOWN NEVIS (September 24, 2019) — An official of the Agriculture Department in the Nevis Island Administration (NIA) is urging members of the public to eat healthy and take advantage of the opportunity to purchase farm fresh foods at farm prices.

Mr. Steve Reid Jr., Chief Extension Officer in the department, made the call when he spoke to the Department of Information on September 24, 2019. He was announcing the return of the Farmers Market, an initiative introduced by the department some months ago.

“We are pleased to announce that we have restarted our Farmers Market coming this Friday at the top of Government Road… The positive about this is that because there’s no middleman you get farm prices. You get fresh produce. So the farmers would normally use the morning to harvest and come right there and sell directly to you, that’s the public…

“I am not saying it’s a sale. I am saying its farm price. There is no additional tax, no mark up on it so be there. We are starting hopefully any time from 2 p.m. until about 6 p.m. On September 27, this Friday, at the top of Government Road where it intersects with Pump Road,” he said.

Mr. Reid also had some advice for farmers, whom the department had not yet contacted but may be interested in participating. He also explained what would be available at the market.

“Just turn up. All you have to do is to bring your product. Come; there is no fee. We provide the environment for you to come and sell…

“We would have a range of vegetables and fruits that are in [season] presently. We would also hopefully have some meat and processed meat from the Abattoir and processed drinks and products from the Agro Processing Plant and other processors within the island,” he said.

The Agriculture official added that the event would also provide an opportunity for interaction with the farmers.

“It’s not the department that is selling. It’s the farmers, direct to you. Meet your farmers. Meet the people who are producing your food. Ask them questions, whether they use manure, fertilizer, what pesticides. You might have a garden at home and may want to ask a few questions: ‘How do you get to stake your banana tree and prevent it from falling during high winds?’ Simple things like these people have problems with, and now you can interact with the farmers.

“The Extension staff will be there to lend support of course and we will mingle and talk…so I am just encouraging one and all to come on out to lend your support and eat healthy,” he said.

Mr. Reid expressed the view that the theme was in line with what the department is trying to engender through the Farmers Market in promoting local produce following on the advice of health experts on the benefits of eating healthy.

In an invited comment regarding the feedback from the previous Farmers Markets by both farmers and the public Mr. Reid said it has been positive.

“Judging from the numerous calls from farmers as to when we would have another and another. They keep calling to know if we are going to be doing it every week rather than once a month, you know that it has been successful from their end.

“From the consumers end, even people in the village have been asking why don’t we do it every Friday. So with that in mind, the prices must be real low for them to be calling for it over and over again and the products, the quality has to be quite high because if you give people stuff that they are not satisfied with they would not be calling so both parties benefit. Our local farmers benefit and the general public benefits,” he said.