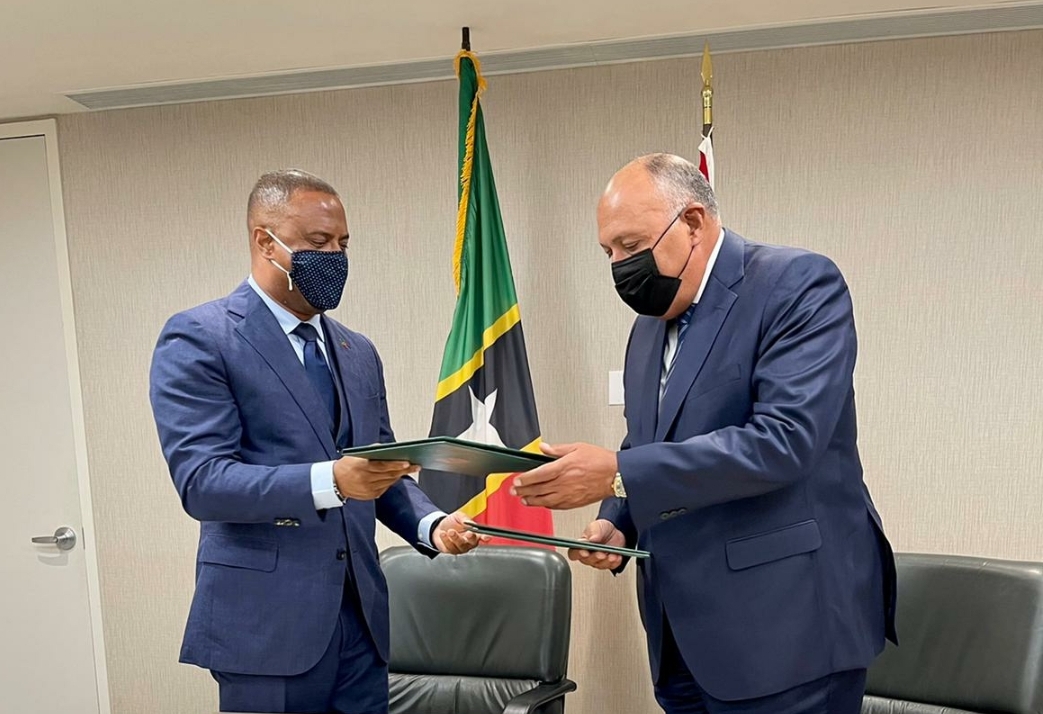 NIA CHARLESTOWN NEVIS (September 22, 2021) – – Premier Hon. Mark Brantley, Minister of Foreign Affairs of St. Kitts and Nevis has been engaged in a number of high level diplomatic meetings against the backdrop of the 76th session of the United Nations General Assembly (UNGA), currently underway in New York, United States.

“This year’s General Assembly is critical for the world, but specifically for our region as we battle with COVID-19 and the ongoing threat and of course existential threats to our survival, such as climate change.

“As part of what I’m doing here I have a number of bilateral engagements, engaging with Egypt, Azerbaijan, entering into various arrangements. We have had an engagement with the United States through Deputy Secretary of State, Wendy Ruth Sherman, with all of CARICOM and we will continue to engage,” he said.

As a result of these diplomatic engagements, Hon. Brantley and His Excellency Sameh Shoukry, Minister of Foreign Affairs of Egypt, signed a Joint Communique on Tuesday, September 21, establishing formal diplomatic relations between St. Kitts and Nevis and the Arab Republic of Egypt.

Mr. Brantley also informed of several other bilateral meetings planned throughout the course of this week between CARICOM Ministers of Foreign Affairs and various members of the United Nations.

“The UN General Assembly is always a busy time for diplomacy and we continue to ensure that St. Kitts and Nevis is known, is well-respected, and continues to be a responsible member of the international community,” he said.

The UNGA 76 General Debate continues this week with diplomats from all 193 member states delivering in-person or virtual addresses in front of the Chamber.

Hon. Dr. Timothy Harris, Prime Minister of St. Kitts and Nevis is scheduled to make a virtual statement on Saturday, September 25, 2021 during the morning session.

The 76th session of the United Nations General Assembly is being held under the theme “Building resilience through hope – to recover from COVID-19, rebuild sustainability, respond to the needs of the planet, respect the rights of people, and revitalize the United Nations”.