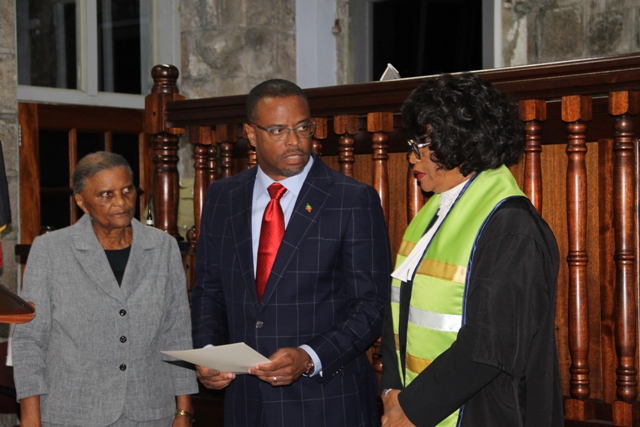 New Premier of Nevis Hon. Mark Brantley with his Instruments of Appointment in hand, moments after Acting Deputy Governor General Her Honour Mrs. Marjorie Morton (right) presented them to him at a special sitting of the High Court in Charlestown, on December 19, 2017. Her Ladyship the Hon. Justice Pearletta Lanns looks on

At the ceremony, Mr. Brantley was presented with his Instruments of Appointment by Her Honour Mrs. Marjorie Morton, Acting Deputy Governor General of St. Kitts and Nevis, while the Oaths of Allegiance and Secrecy were administered by Her Ladyship the Hon. Justice Pearletta Lanns.

The ceremony which was witnessed by a courtroom parked with colleagues, family, friends and well-wishers, came hours after Mr. Brantley’s Concerned Citizens Movement (CCM) party swept the Nevis Island Assembly Elections the day before with a 4-1 victory.

Mr. Brantley will be sworn into office along with his Cabinet at a ceremony, at an appointed date and time to be announced shortly.