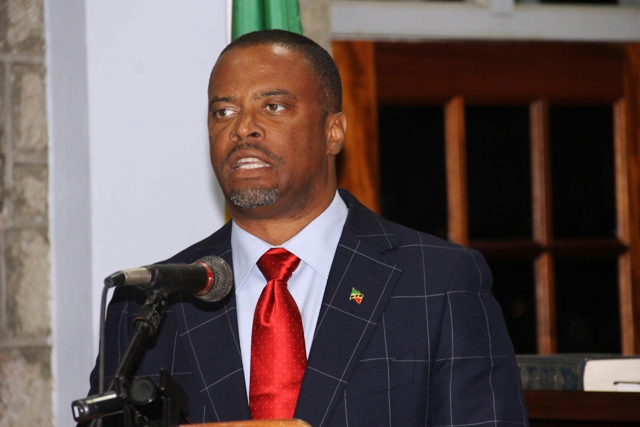 Premier of Nevis Hon. Mark Brantley delivering an address moments after he was sworn-in as premier at the High Court in Charlestown on December 19, 2017

NIA CHARLESTOWN (December 20, 2017) — The following is an excerpt from the first address made by Hon. Mark Brantley as Premier of Nevis, moments after he was sworn-in at the High Court in Charlestown on December 20, 2017.

I thought it important to say a few words on this historic and momentous occasion for our island of Nevis. I stand before you as only the fourth individual who has been sworn in as the premier for our island.

Those that have gone before me, the Right Excellency Sir Simeon Daniel our first premier and National Hero, the Hon. Vance Amory who has done two terms; two stints as premier and the Hon. Joseph Parry who himself has done a stint as premier. I represent the fourth individual, not the youngest individual, who has been bestowed with this honour.

I believe all of you would have recognised that we went through a difficult election period. It was short but appeared longer ten it actually was and that yesterday, our people in free and fair elections elected a government of their choice.

I’m delighted that the people of Nevis have decided to elect the concerned Citizens Movement (CCM) and in so doing, have afforded me the opportunity to lead this island that we love so much, this island of Nevis.

I am hopeful, that the Hon. Vance Amory will continue to make himself available to us, to provide the maturity and the advice that have always been the hallmarks of his own leadership style.

I think, the ordinary Nevisian and we know that Nevisians are extra ordinary people, so I use that term advisedly but the ordinary Nevisian, should feel comfortable coming to this government, bringing your concerns, your ideas because certainly it is you who have decided that we are the ones that you would wish to make your servants in chief.

We are the ones who you have given this tremendous opportunity to serve you and so, we would wish to have an open door, where you can come and you can share your views, your concerns, your opinions and help us, to govern in a manner that is most beneficial to all.

I propose and administration that would be inclusive. Whilst it is the nature of our politics that it is divisive and partisan, I believe the campaign is now over and so, it is important that with the campaign being behind us that all Nevisians now hold hands and come together and try to do our very best to develop our island.

I cannot do it alone. The people that you elected to government will not be able to do it alone. Those who are supporters will not be able to do it alone and so, we feel it is important to set the right tone to say to the NRP, to their supporters, recalling, that thousands of people would have also gone out and voted for them, that they have a place in Nevis and a contribution to make, that as a government, we have to govern for all.

We want a Nevis which is kinder and gentler and in order for us to achieve that, we will need to set the tone from the Premier’s Office on down. It is critically important that we build the type of Nevis that we want and that we do not squander the excellent platform, the excellent foundation that has been left us by the Hon. Vance Amory.

We have to remind ourselves and I would expect that you will remind me, if we forget that we are servants of the people and I hope that we will be govern in a way when next we come back to you, it would be a little bit easier than it was yesterday.

I want to thank Her Ladyship Pearletta Lanns, who may not tell you but at one point we were almost neighbours in Hanleys Road a long, long time ago and so, in an odd twist of faith, the fact that she is here administering the oath as our resident judge, to me as our new premier is quite fascinating. It is almost as if history, several decades later, has again brought us together. So I want to thank Her Ladyship for taking time out to be here today.

Ladies and gentlemen, I do not propose to detain you. I will only say, that at some point appointed soon we will have the formal swearing-in for the entire cabinet. We are already considering who and how Cabinet will be configured and so in due course will have that and when that happens, we hope that all of you who are here and all of who are not here will come out and be a part of that very historic occasion.

I want to end with a personal note. I called Lady Sheila and asked her to be here because her husband of blessed memory, was as a father to me and he mentored me and he helped me and whilst he is not here today to witness this occasion, I feel that if he was he would be proud that I am standing in a position where he hitherto stood and Lady Sheila, I want to thank you for lending him to us for the time that he was here.

I think that he has served Nevis well and that he has helped me and moulded me and if I fail, the failings are mine. If I succeed, he would have contributed to that success.

I want also to thank, even though they are not here, I am hopeful that perhaps they are some place netter and they can hear me – my own father own father and mother – Irvin Brantley and Cynthia Williams. I think that if they were here, that they would have been proud and I thank them and I thank you. Thank you.