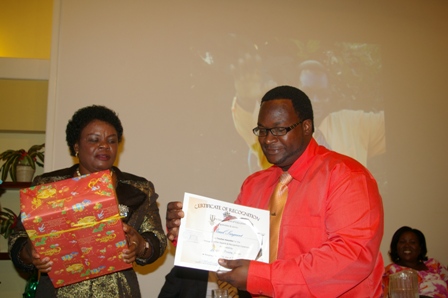 “On behalf of my fellow awardees I would like to convey my deepest and sincerest thanks and appreciation. It is nice that we could get our flowers while we are living. The Bible says your labour of love would not be in vein.

“Tonight colleagues our labour of love did not go in vein, tonight we are showered with all these accolades, all these appreciations and I must say I am sincerely touched and I believe my fellow colleagues feel the same. Once again I express my sincerest thanks and appreciation and may God continue to bless you,” he said.

The journey for their selection began just prior to July 2012 when their peers in their respective schools selected them, having seen in them something noteworthy and deserving of the recognition. 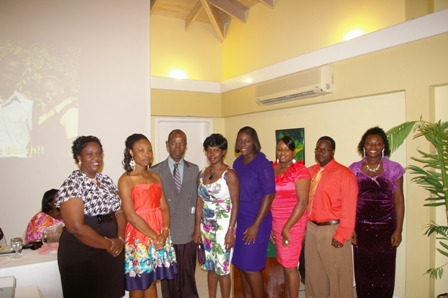 Notwithstanding, transferee Mrs. Lydia Claxton along with retirees Mr. Wilroy Gerald, Mrs. Ullida Gill, and Mrs. Joycelyn Washington were also honoured while Mrs. Althea Daniel and Dr. Telbert Glasgow were acknowledged for their contribution to Education on the island.

Education Official Mr. Laurence Richards who delivered the welcome remarks and chaired the event said the journey of the retirees represent an accumulated contribution in years of several decades. “This is a national gem that cannot be allowed to go unnoticed or unsung,” he said.

According to Mr. Richards, the basic intent of the ceremony has been to identify, acknowledge and publicly showcase the Education Department’s good teachers or the good that their teachers had been doing.

“In doing so, the Education Department acknowledges that these people and these actions help to develop and enhance our education system,” he said.