Premier Parry giving a gift basket to Mrs. Rose Martin of Jessups village on his 25th anniversary of elected office

Charlestown, Nevis(Monday, December 17, 2012)–Scores of Nevisians joined Nevis Premier, the Hon. Joseph Parry on Sunday, Dec. 16, as he worshiped at his home church, the St. Thomas Anglican, in celebration of his 25th anniversary as an elected official.

Among the celebrants were fellow Cabinet members, family, parishioners, friends and well-wishers.

In his message, parish priest and chief celebrant Father Alric Francis, urged the Nevisian leader to remain humble, and to continue to be a servant of the people.

“It is important that politicians understand that when they are elected to political office they are not the master but the servant of the people,” commented Father Francis.

Premier Parry was first elected to the Nevis Island Assembly on December 14, 1987, and has given 25 years of unbroken and unstinting service, both in government and in the opposition. He has been Premier since July 11, 2006.

Following the service, Premier Parry interacted with the congregation, giving hugs and kisses, and telling celebrants, “Peace be with you.” 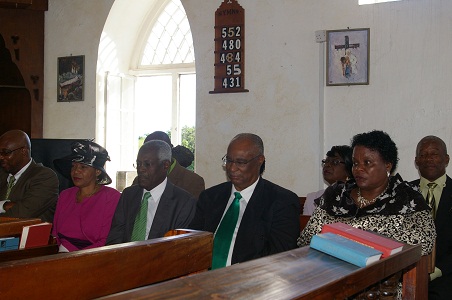 In an interview with the Department of Information following the service, Parry expressed his delight at celebrating the milestone at the church where he grew up and has remained a lifetime member. Built c.1643, the historic church on the hill, is the oldest active Protestant church in the Caribbean.

He thanked the people of St. Thomas’ Parish, who he said he has represented proudly under the Nevis Reformation Party (NRP) banner for a quarter of a century.

“Over the years I have been voted for overwhelmingly by the residents of St. Thomas’, I vow to never take the constituents for granted, and I promise to remain a humble servant of the people.”

On Friday evening, the actual anniversary date, Premier Parry and his Cabinet Secretary, Mr. Ashley Farrell visited 25 senior citizens in the constituency, and gave each senior a gift basket.