Mr. Hector, the Chairman of the NHLDC, had joined General Manager Mr. Eustace Nisbett and other Board Members on a guided tour of the Corporation’s four ongoing housing development peojects.

“I am happy that the housing revolution is alive and well. My personal highlight for the day was actually seeing a female worker as part of a construction team here in Colquhoun.

“It demonstrates that we have crossed the steryotype barrier and we are empoying regardless of gender here in Nevis and that is pretty exciting for me,” he said.

According to the Minister, the sole female construction worker was one of about 125 persons currently employed directly in construction of the Corporation’s housing projects.

“I am advised that there are some 125 persons employed at this stage in the construction phase and assisting the Land and Housing Corporation. It is my understanding that this does not include the complimentary aspect of the work that is painting, cabinetry and plumbing. So all in all, it may very well be about 150 persons that we can say are being employed. 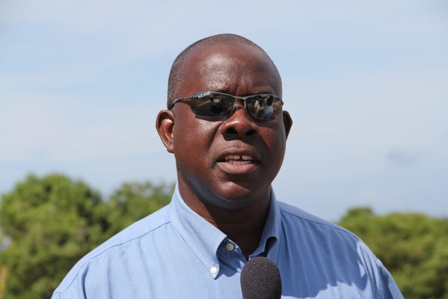 “This is definitely assisting the economy at this stage. The construction inductry has always been that inductry that helps with the development of this economy,” he said.

Commenting on the pace of works, Mr. Hector said he was satisfied with what he had seen in relation to the projects forward movement but singled out the extension project at Ramsbury.

“I am overall satisfied having visited the four projects this morning. I am particularly moved with the Harbour View project [extension] that just started in June of this year and it seems as if it would be completed by early January.

“The estimated finishing time would have been June of next year but the workers, in my mind, are doing well and it seems like we will have an early opening for the second phase of the Harbour View project,” he said.

Notwithstanding, Mr. Hector stated that he was pleased the NHLDC was satisfying the needs for housing in Nevis and he looked forward to what he described as “the housing dream” which would satisfy the 700 home deficit as suggested by statistics from the Planning Department.

He noted that the Corporation continued to receive at least 30 new applications per month for housing, which has enabled it to determin how the housing needs on Nevis could be satisfied.

In relation to the future of housing on Nevis, Mr. Hector indicated that the Corporation had already begun to position itself in that regard.

“As we look to the future for housing in Nevis, the Corporation has just purchased an additional 11 acres of land in the St. James area, where we are contemplating another housing project to satisfy in excess of 90 families.

“We have also cleared some three acres in Hamilton and that should satisfy another 20 homes in that particular area. In Cherry Gardens Phase 2 we anticipate that some 52 new homes would be built in that area,” he said.