Premier of Nevis Hon. Vance Amory delivers remarks on July 21, 2014, at Long Point at the handing-over ceremony of a refuse disposal truck, a gift from the government and people of the Republic of China (Taiwan)
NIA CHARLESTOWN NEVIS (July 24, 2014) –Premier of Nevis Hon. Vance Amory says the Nevis Island Administration (NIA) is committed to the continued relationship Nevis has enjoyed with the Republic of China (Taiwan) over the years and would do everything necessary to improve the connection both islands share.
Mr. Amory’s comment came when he delivered remarks at a handing over ceremony held at Long Point Port on July 21, 2014 to receive a gift of a garbage disposal truck from Republic of China (Taiwan) Resident Ambassador to St. Kitts and Nevis His Excellency Miguel Tsao.
“I want to reiterate my and my Administration’s commitment to maintaining and improving, wherever possible that relation between your country and our country and especially the island of Nevis and the Administration on behalf of the people of Nevis… The relationship which we have had has certainly been beneficial to the people of Nevis,” he said.
Premier Amory also thanked the Ambassador and the Government and People of the Republic of China (Taiwan) for the gift which he said would help enhance Nevis’ tourism product.
“I want again to say how very grateful I am on behalf of the Administration, on behalf of the people of Nevis. I want to extend my heartfelt gratitude for this gift…
“I want to say to you Sir, that it will enable us to further carry out the mission to a greater degree of efficiency, to ensure that Nevis remains a beautiful country for our people, that it also is an attractive place for visitors. We are sure that someday we might have connections between the Republic of China (Taiwan) and Nevis, where we can have people come here on a regular basis to make Nevis their holiday home and you and your government would have done a lot, to ensure that we are able to provide that kind of environment,” he said.
Meantime, Mr. Amory also took the opportunity to refer to a number of areas in which assistance had been received and others which were forthcoming. In the area of Education he noted that four students had received scholarships to attend universities in Taiwan and the expected assistance for the University of the West Indies Open Campus on Nevis.
“I think, this for them, for their family and the people of Nevis, is a relief but it is also a great investment by your government in the human resource development of the people of Nevis. I want to say on behalf of those students, my and the Administration’s sincere thanks for your willingness, always, to ensure that our people get assistance from you…
“I also can speak of the help you have given and your country has given and your present pledge to assist us with the University of the West Indies Open Campus to enable our students here, to have access to university education, through the provision of computers and other equipment to facilitate the distance learning which is carried on at that campus,” he said.
Mr. Amory described the campus as a blessing to Nevisians who continued to take advantage of the opportunities available at the facility to enhance their capacity and the eventual development of Nevis.
He also spoke to the Republic of China (Taiwan)’s assistance in the area of health and in recent times the provision of an expert who would create a computer system for medical records at the Alexandra Hospital.
“It is important that we have proper records and I want to thank you for assigning one of your staff from your country, to assist us in setting up that medical records improving the data collection, the data assessment there at the hospital,” he said.
The Premier also spoke to the provision of 10 vehicles to the Royal St. Christopher and Nevis Police Force by the Republic of China (Taiwan) and expressed hope that Nevis would be allotted a fair share.
“I know that you are expecting we will receive a fair and equitable share of those vehicles.I know that our Police Officers will be happy to know, that these vehicles will be equipped with GPS equipment and other aids, to ensure that the vehicles are used properly but also to help them in their fight against crime and this I want to thank you for as well.
“I think the High Command here is asking for at least three of those vehicle and I don’t know how many they will get but four would not be something we will scoff at. If we got four, we will be very happy. I know you are not responsible for the distribution but I am sure the Prime Minister, the Minister of Homeland Security and the Commissioner of Police, would be minded to give us the maximum that they can and four would be a good maximum,” he said.
The area of Agriculture was another sector in which Mr. Amory said the Republic of China (Taiwan) continued to assist and registered the Administration’s gratitude.
“Your government, Your Excellency, has been very helpful to us in the development of the agricultural sector. I want to say that we have seen the benefits of the support and the technical assistance which your government has given through that mission,” he said. 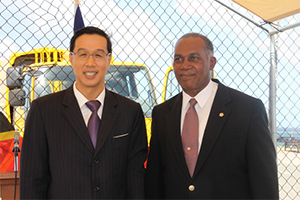 Notwithstanding, Mr. Amory said even though Nevis had been assisted in a number of areas, he was hopeful that some assistance could come in the area of fire fighting.
“Another area which I am sure that you would be mindful to help us in, even if it takes a little time, is fire tenders. We suffer a little bit from a lack of that.
“It is a Federal issue but I think we will do no harm, if we are able to get assistance from you to help us. We have raised the matter also with another government agency, the US Government, which has provided our Emergency Operations Centre here on Long Point Road but I think it would be at the point where it is important for us, so that our people can feel secure that if a fire occurs, that we are able to provide a response to them to secure their property and to save lives,” he said.