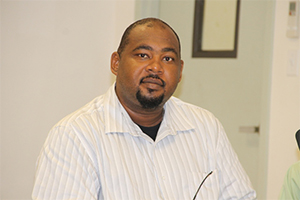 Member of the Culturama 40 Marketing Sub-Committee Huey Sargeant
NIA CHARLESTOWN NEVIS (July 23, 2014) –Key events for the Culturama 40 festivities will be streamed live on a pay per view basis. That disclosure was made by Culturama 40 Marketing Sub-Committee member Huey Sargeant, in an interview with the Department of Information on July 23, 2014.
He also noted that there would be added incentives for viewers during the season and urged persons to visit the website to sign up.
“The Nevis Culturama Committee is pleased to announce its streaming service for Culturama 40 on http://media.culturamanevis.com. We have worked very hard to enable persons who are unable to be in Nevis, to access and experience this milestone, with live streaming of the major shows.
“We have decided to make available for free the grand launch of the festival on July 24, 2014; Poets in the Square, July 28 to August 01, 2014 daily from midday to 1 p.m.; and the Cultural Street Parade on the streets of Charlestown on August 05, 2014,” he said.
According to Sargeant, the first pay per view event would be the St. Kitts-Nevis-Anguilla Trading and Development Company (TDC) Senior Kaiso Monarch Semi-Finals Contest from 9 p.m. on July 25 at the Cultural Complex for US$9.99, followed by the Mr. and Miss Talented Youth Pageant and Junior Kaiso Contest from 6 p.m. on July 27, 2014 also at the Cultural Complex.
The Miss Culture Swimwear and Mr. Kool Contests will be streamed live on July 29, 2014 at the Cultural Complex from 8:29 p.m. for US$14.99, followed by the Miss Culture Queen Pageant at the same venue and cost on August 02, 2014 from 8:59 p.m.
The TDC Senior Kaiso Contest will be streamed live from 9 p.m. on August 03, 2014 from the Cultural Complex from 9 p.m. for US$14.99. On Monday August 04, 2014, the Emancipation J’Ouvert Jump-Up on the streets of Charlestown which will be streamed from 6 a.m. at a cost of US$5.99.
The Miss Caribbean Culture Queen Pageant, the final major show of the season will be streamed from 9 p.m. on August 04, 2014 from the Cultural Complex for US$14.99.
Mr. Sargeant explained that streaming is a costly exercise but with assistance, the Sub-Committee would be able to provide the service at affordable rates.
“The venture is a costly one and on behalf of the Committee, we would like to thank our partners LIME, Caribbean Cable Communications and Nevis Television. They have enabled us to offer streaming at a reduced rate,” he said. 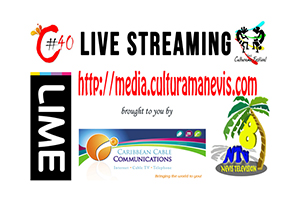 The Culturama Sub-Committee member also provided some details about the streaming service which would be offered.
“Our webmaster is working to have the stream available in multiple bitrates which would allow for persons to select the quality that would best suit their needs.
“One of the things we are quite proud of is that we will be able to provide a mobile stream which patrons would be able to access on their smart phones. So there is really no excuse to miss out on the experience of ‘Revelry, Splendour and Creativity for Culturama 40,’ ” he said.