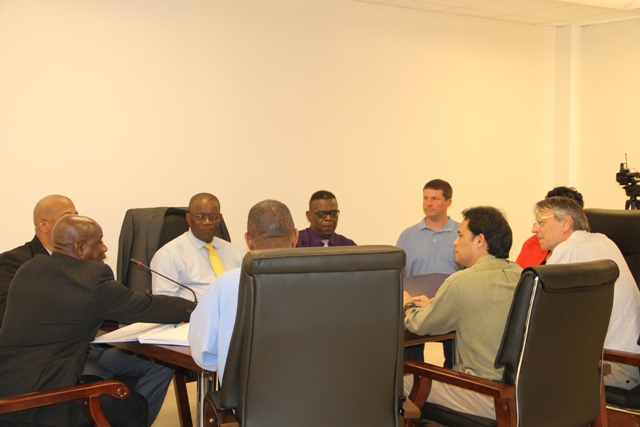 NIA CHARLESTOWN NEVIS (January 31, 2018) — In an effort to further the Nevis Island Administration’s (NIA) quest for the inscription of Charlestown as a United Nations Educational, Scientific and Cultural Organization (UNESCO) World Heritage Site by 2020, a team of specialists from the International Counsel on Monuments and Sites (ICOMOS) met with ministers in the Nevis Island Administration (NIA) while on a fact finding mission to Nevis.

Mr. Jeffers spoke of the initiative which was started by the last premier of Nevis. Charlestown has been listed on the tentative list of UNESCO’s World Heritage Sites.

“I know the former Premier Hon. Vance Amory was very instrumental in having this started. Of course he must have seen some good reason why he would have indicated that we would want to pursue Nevis as being considered as a World Heritage Site.

“Indeed, the whole of Nevis I’m sure would be interested and keen in knowing where we are and where we’re going, and what benefits there are to be derived from this particular designation,” he said.

During his tenure, Mr. Amory put together a team named the Nevis World Heritage Committee chaired by Mrs. Evelyn Henville. They are charged with working toward having Nevis named as a World Heritage Site.

Meantime, a hopeful Mr. Evelyn gave assurance of the NIA’s continued commitment to the project to ensure that Nevis wins UNESCO’s approval for the inscription of Charlestown.

“We’re very delighted to have you and we’re hoping that this visit will bear fruit and we will see the fruit of the labour in 2020,” he said.

Mr. Brand, also pledged support for the project expressed gratitude for the opportunity to listen to the status of the project.

He said he is certain that once the bid succeeds, the island would profit from the inscription.

“Nevis would benefit from this and it gives us that ‘leg-up’, so to speak, as one of those unique places.

“Nevis has always been a unique place but this would certainly add to the uniqueness of it,” he said.

Also present was Dr. Everson Hull, St. Kitts and Nevis Ambassador to the Organization of American States (OAS) who is serving on the committee as Chairman of the International Partnerships and Solicitation Committee.

ICOMOS is dedicated to the development of common doctrines, the evolution and circulation of knowledge, the creation of improved conservation techniques, and the promotion of cultural heritage significance.

While on Nevis the ICOMO specialists also met with members of the Nevis World Heritage Committee and toured the island.