CHARLESTOWN NEVIS (April 22, 2010) — The Inter-American Institute of Cooperation on Agriculture (IICA) St. Kitts/Nevis office registered gratitude to the Nevis Island Administration (NIA) for what an official said was the opportunity the organisation was given, to contribute to the development of the Agro-processing Sector on Nevis.

Assistant Executive Secretary Mrs. Ingrid Greene-Mills told those gathered at the official opening ceremony to commission the Nevis Agro Processing Centre at Prospect on Tuesday that the assistance was in line with the Administration’s efforts to enhance its diversification plans and its efforts to add value to the various crops produced locally on the island.

She described the path which culminated in the lab’s official opening as long and winding. The IICA Official also pointed to the Organisation’s assistance with accessing approximately EC$135,000.00. in grant funds for the Nevis Agro Processors Cooperative.

According to Mrs. Greene-Mills, in 2001 IICA commenced a consultative process towards the development of a National Agenda for the period 2002-06. One of the areas identified was the development of agro processing, since it had been a long tradition for many Nevisians especially during the months of August and September.

“The Institute wanted to ensure that this task was approached in a methodical manner and as a preliminary action it set about conducting an assessment of the Agro Processing Industry on Nevis. The assessment was undertaken by Dr. Bob Bates and Dr. Mike Talbot from the University of Gainesville in the United States.

“Three of their recommendations which stood out were that the highest priority need was for training in food safety and preservation; that IICA in collaboration with the Ministry of Agriculture on Nevis should encourage and assist local processors in the formation of a cooperative to serve as the focal point for a small processing industry and that the feasibility of establishing a community processing facility could be explored. The facility would spread the cost of equipment, containers and utilities over many users,” she said.

In its quest to realise the recommendations, Mrs Greene-Mills explained that IICA undertook several strategic actions. Among them were two four-day workshops conducted by Ms. Judith Ann Francis, IICA’s Specialist in technology based in Trinidad. 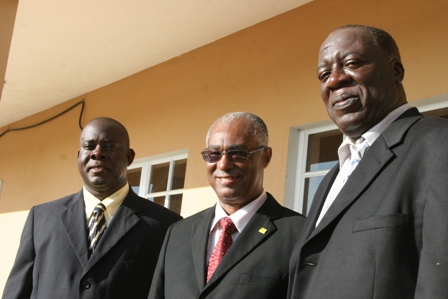 IICA’s Coordinator for St. Kitts and Nevis and former Director of Agriculture on Nevis Mr. Augustine Merchant (right) shares a light moment at the opening ceremony for the Nevis Agro Processing Centre at Prospect with Premier of Nevis Hon. Joseph Parry (center) and Minister of Agriculture Hon. Robelto Hector (left)

The first workshop was devoted to theoretical areas which included the principles and practises of food processing, presentation and labelling, good manufacturing practices, the use of food preservatives, small scale equipment and the need for standard.

The second was used for practical training. On completion of that workshop the participants were able to utilise the new information to produce better quality controlled products such as chips, jams, jellies, hot sauce, mango chutney and chicken ham.

The formation of the Nevis Agro Processors Cooperative was actively undertaken by the Department of Cooperatives.

Mrs Greene-Mills outlined IICA’s assistance for the establishment of a processing facility.

In 2004 the Institute assisted the agro processors in obtaining a grant of US$5,000 from the Caribbean Food and Nutrition Institute (CFNI) for the purchase of agro processing equipment.

In 2005 the Institute was also instrumental in arranging and funding a trip to Grenada for the then Director of Agriculture Mr. Samuel Powell to observe the layout of facilities there. He was also able to dialogue with various operators with regard to some of their best practices, some of which were incorporated into the plan of the Nevis facility.

Later in 2008, the IICA Official said the Institute collaborated with the Department of Cooperatives for the development of a project called “Enhancement of production and Productivity of the Nevis Agro Processors Cooperative. It was submitted to the Canadian Fund for Local Initiative (CFLI) for consideration. It was approved and funded in the amount of CD $21,793.00 and was used to purchase equipment and to conduct training in food safety and technology.

“In 2009, the Institute was able to access US$10,000 from the Canadian Fund for Local initiative to purchase a walk in cooler. Through the initiative of IICA, the Nevis Agro Processors Cooperative received a grant of US$15,000.

“This was used to assist with fencing the property, installing the walk in cooler and purchasing a hammer mill. This mill has the capability to convert cassava and breadfruit into flour,” she said.

Mrs Greene-Mills represented IICA’s Coordinator for St. Kitts and Nevis and former Director of Agriculture on Nevis Mr. Augustine Merchant who has been recuperating from illness but was able to attend the facility’s official opening ceremony. He along with Premier of Nevis and Minister of Finance Hon. Joseph Parry cut the ribbon to commission the facility