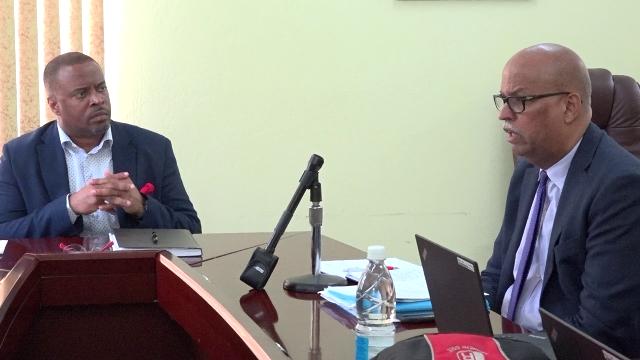 (right) Mr. Arnold McIntyre, Deputy Division Chief in the Caribbean Division at the International Monetary Fund’s Western Hemisphere Department and (left) Premier of Nevis Hon. Mark Brantley at a meeting at the Ministry of Finance Conference room on June 27, 2018

NIA CHARLESTOWN NEVIS (June 27, 2018) — Mr. Arnold McIntyre, Deputy Division Chief in the Caribbean Division Department at the International Monetary Fund’s (IMF) Western Hemisphere Department and leader of the an IMF delegation to Nevis, says the they are encouraged by the Nevis Island Administration’s comprehensive approach to the challenges facing Nevis.

The Deputy Division Chief and his team were on Nevis on June 27, 2018, meeting with senior members of the Ministry of Finance, as part of the Fund’s annual Article IX Mission, to review the economy of St. Kitts and Nevis.

“We are particularly encouraged when we connect the dots on what you have been saying, your focus on growth and trying to increase the systemic rate of growth that the island experiences through your various initiatives with small and medium-sized enterprises, addressing your business climate with the creation of a one-stop shop. These are all proposals which in our view are going in the right direction.

“Your intention to try and encourage young people to get involved in independent businesses, rather than relying on the state and to benefit from that is also going in the right direction,” he said.

Mr. McIntyre also pointed to the administration’s pursuit of geothermal energy, a project that would transform the island.

He said it would place Nevis in a better position to attract foreign investment.

“I think, like you do, that the geothermal energy project is a transformative project for you. It certainly would put your island in a far more advantageous position, competitively, to attract foreign investment and energy is such an important part of that…We are really hoping that this materializes,” he said.

Mr. McIntyre said the team would spend some time with the technical staff in the Ministry of Finance discussing Nevis’ near term and medium term fiscal performance and policy challenges. He added that the measures the Administration had put in place including the ongoing Property Tax Amnesty to combat the challenges would help.

The IMF official assured of their full support of the emphasis the NIA is making to increase growth on the island in all areas including tourism and the revitalization of the offshore sector.

“We will try to see with your staff how we can strengthen your fiscal framework, such that it will give you a little additional fiscal space to try and promote these infrastructural developments that are key to investment.

“So overall, Premier, we fully support your direction. We are here to learn from your staff and to give you the best of our advice and we hope this is helpful to you as you proceed with your country and Cabinet to move Nevis forward,” he said.

Since the new Administration took office six months ago, the Ministry of Finance has taken a number of initiatives to help bolster the island’s economy including: concluding its debt-restructuring arrangement with the St. Kitts-Nevis-Anguilla National Bank; reforming concessions for developers; empowering small and medium-sized enterprises, including providing seed funding for female and young entrepreneurs; seeking to reform the Small Enterprise Development Unit and twinning it with the Nevis Investment Promotion Agency; offering property tax amnesty; and seeking to grow the offshore sector.