Deputy Managing Director of the International Monetary Fund Min Zhu and Premier of Nevis and Minister of Finance Hon Vance Amory at a meeting with stakeholders at the Four Seasons Resort on September 02, 2015
NIA CHARLESTOWN NEVIS (SEPTEMBER 04, 2015) — A team from the International Monetary Fund (IMF) led by Deputy Managing Director Min Zhu, met with Premier of Nevis and Minister of Finance Hon. Vance Amory and members of the private sector on September 02, 2015, to discuss the economy of Nevis.
The meeting which was hosted by the Ministry of Finance in the Nevis Island Administration (NIA), was held at the Four Seasons Resort. The session came before a two-day IMF meeting in St. Kitts which concludes on September 04, which forms part of a series of ongoing meetings throughout the region discussing the issue of sustainable development in the area.
At the end of the meeting Mr. Amory expressed satisfaction with the responses and comments from the Deputy Director and from those in attendance.
“I think they [IMF officials] are very heartened, indicating that St. Kitts and Nevis has a projected five percent increase in economic growth over this next year.
“I think the comments from the participants who were there were also very positive and we addressed a number of issues what we are doing in tourism promotion development, what we are doing in the private sector generally and even discussed the issue of crime and what strategies could be adopted to reduce crime in Nevis and St. Kitts and Nevis generally,” he said.
Mr. Amory disclosed at the meeting a planned meeting the following day with Head of the Royal St. Christopher and Nevis Police Force, Nevis Division, Superintendent Hilroy Brandy and representatives of the consultants who are contracted to provide developmental training and strategies for the police.
He also expressed hope, that the Administration would find a way and find strategies to reduce the level of crime, so that it would not stand in the way of Nevis’ economic development.
Meantime, Permanent Secretary in the Ministry of Finance Colin Dore said the meeting was also to determine how the Citizen By Investment (CBI) programme would benefit the future of Nevis, what are its challenges and opportunities and overall, what role the programme can play in the economy going forward. 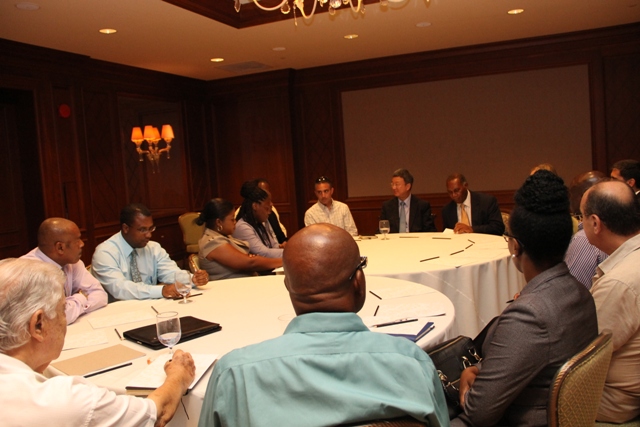 He said they also discussed renewable energy and what has been done on Nevis in that regard.
At the end of the meeting the IMF team toured the Wind Farm at Maddens, the only facility of its kind in the Leeward Islands, to assess the impact of wind energy in the reduction of the Nevis’ energy bill and to help the Administration to achieve energy sustainability in the future.
Other members of the IMF team were Chief of Missions to St. Kitts and Nevis Judith Gold, Regional Representative Wayne Myers and Tarhan Feyzioglu. Minister responsible for Renewable Energy on Nevis Hon. Alexis Jeffers and Foreign Service Officer in St. Kitts Kervin Lloyd were also present.