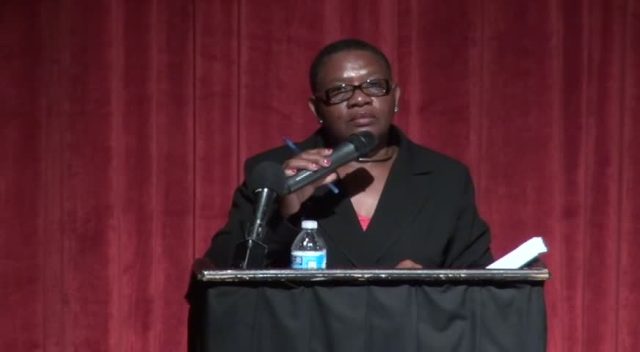 Principal Education Officer (PEO) in the Department of Education on Nevis Palsy Wilkin
NIA CHARLESTOWN NEVIS (September 02, 2015) — Principal Education Officer (PEO) in the Department of Education on Nevis Palsy Wilkin, described the 2015/2016 Back to School Opening Exercise for teachers as excellent. The event was held on August 31, 2015, at the Michael Herald Sutton Auditorium in the Nevis Performing Arts Centre.
Wilkin made the comment when she spoke to the Department of Information on August 02, 2015. The School Opening Exercise was held with the theme “United for Quality Education through Passion, Vision and Action for a Better Society.”
“It was excellent. It was different to what we have been doing over the years because we got the teachers to be involved. We did some activities which involved them.
“We were looking at the gold standards for teachers, setting the theme for the best teachers should aspire to be,” she said.
During remarks at the Back to School Exercise, Wilkin told the teachers the theme chosen was no coincidence. She explained that it was three years since the Department has sought to implement the Child Friendly School Framework and to date had engaged the schools in several different ways.
The Back to School Exercise she said brought all teachers together so that moving forward they would be on the same page where implementation of the Child Friendly School Framework was concerned.
According to Wilkin, the Child Friendly Schools Framework is intended to move schools and education systems progressively towards quality standards, addressing all elements that influence the wellbeing and rights of the child as a learner and main beneficiary of teaching, while improving other school functions in the process.
She stated that in May of this year, the department was offered training via Skype in the delivery of a specific programme called “Olympian Thinking.” It was open to all teachers and anyone in the department who come in contact with young people.
The training was held over six weeks with 90-minute sessions every Sunday. Wilkin expressed gratefulness to those who took the training offered.
However, during the training the department realised links made with the Child Friendly School Model were similar to what the department was trying to implement.
As she wished the teachers a successful school year, Wilkin appealed to them to look within and to look at their value systems.
“Only if we do that would we be able to give of our best: our honesty, our respect, our humility, our everything that goes along with it…May we have the passion, see the vision and put action to it,” she said.
The PEO also used the opportunity to announce staff changes the teachers would face with the reopening of school. She said two persons had retired, four had left teaching to move on to new endeavours, five had gone overseas to further their education, nine left to pursue two years of teacher training at the Clarence Fitzroy Bryant College (CFBC) in St. Kitts while five had returned to Nevis on completion of their training there.