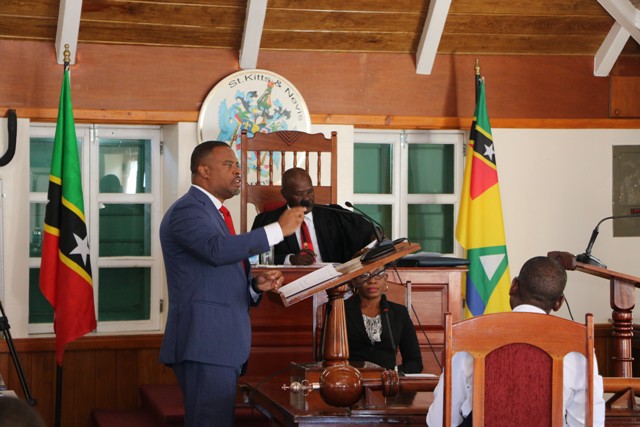 NIA CHARLESTOWN NEVIS (November 19, 2019) — The issues of penalties, confidentiality and those persons who are subject to the legislation came in sharp focus when a Bill to amend the principal legislation – Integrity in Public Life Ordinance No 2. of 2013 – passed unopposed at a sitting of the Nevis Island Assembly in chambers on November 19, 2019.

The Integrity in Public Life (Amendment) Bill, 2019, which was introduced by Hon. Mark Brantley, Premier of Nevis and Minister of Finance, and had its first reading in a previous sitting of the assembly on October 08, 2019.

Under the amended legislation, Section 27 of the principal ordinance was repealed and replaced with rules governing the commissioners and employees at the Integrity Commission.

(2) Any person who contravenes sub-section (1) commits an offence and is liable on summary conviction to a fine of fifty thousand dollars or to a term of imprisonment not exceeding five years or to both such fine and imprisonment.

(3) An authorised person who publishes information which comes to his or her knowledge pursuant to subsection (1) to an unauthorised person commits an offence and is liable on summary conviction to a fine of fifty thousand dollars or to a term of imprisonment not exceeding five years or to both such fine and imprisonment.”

Other amendments were made to Section 3 with the insertion of a new sub-section which provides guidelines to ensure confidentiality at the Commission.

3(4) states that “Every member of the Commission and staff of the Commission shall, before assuming the functions of his or her office or as soon as practicable thereafter, make and subscribe the Oath of Secrecy in the form prescribed in Schedule IV.”

There was also an amendment to Section 15 with an insertion which addresses the action to be taken for failure on the part of those required by law to file a declaration.

According to sub-section (7),  “Where a person who is required to do so fails to file a declaration in accordance with this section or without reasonable cause, fails to furnish further particulars in accordance with section 20, the Commission shall publish such fact in the Gazette and at least one newspaper in general circulation on the island of Nevis.”

In sub-section (8), “the Commission may, at any time after the publication referred to in sub-section (7), make an ex parte application to the High Court for an order directing such person to comply with the Ordinance and the Court may in addition to making such an order, impose such conditions as it thinks fit including costs.”

In sub-section (9), “A person who fails to comply with the directions of the Court, commits an offence and is liable on conviction to a fine of fifty thousand dollars.”

Under the amended legislation, the “Schedule” comes into force retroactively as of June 20, 2018.