NIA CHARLESTOWN NEVIS (January 12, 2011) — A show of investor confidence in the sitting Nevis Island Administration manifested itself on Monday, when local investors the TDC Group of Companies opened its City Drug Store 2011 (NEVIS) Ltd. on Nevis.

Minister responsible for Trade and Industry on Nevis Hon. Dwight Cozier, who also serves as Chairman of the Nevis Investment and Promotion Agency was on hand for the occasion. He welcomed the new facility and described it as a sound endorsement in the business initiatives offered by the Administration.

As Mr. Cozier welcomed the new business, he also had words of encouragement to other pharmacies that had provided service to the people of Nevis over the years and urged them to view the new drug store as one that would help develop their businesses in a positive manner.

“I am one that believes that competition does not have to be a bad thing. I just want to extend these words to the owners and managers of those drug stores to look at this new venture in a positive way and to see where they can exploit opportunities, see where they can emulate if possible and increase their competition so that they can compete in this market,” he said.

Notwithstanding, the Minister pointed to what he described as some challenging years for the NIA but held the view that it’s new venture into 2011 based on the Budget tabled in the Nevis Island Assembly in December spoke to a number of business developments that would take place in Charlestown. 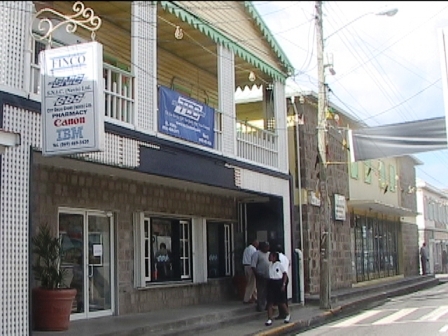 The TDC Plaza on Main Street in Charlestown, where City Drug Store 2011 (NEVIS) Ltd. is located

“We will be starting the demolition process right next door which will see the creation of some 25 boutique shops placed alongside the Waterfront. So you are well placed Mr. Morton [Director TDC] and I believe that in the few months that we are anticipating down the road, we will see an explosion of business activity right here in Charlestown which you and your staff will be able to benefit from,” he said.

Meantime, in response Mr. Morton thanked the NIA for facilitating the Company and its encouragement to expand its business affairs on Nevis.

He explained that about EC$1.5million was invested in the new facility and it formed part of the redevelopment of the TDC Plaza in Charlestown. However, Mr. Morton noted that more could be expected and plans were afoot for more renovation work on the western side of the property’s ground floor.

“Upstairs we are also redeveloping and providing office space for rent as well as for internal use. This all indicates that we are investing substantial sums in Nevis at this particular time and we are doing so in anticipation of the continued growth and development that we anticipate here.

“As you mentioned you are about to undertake the redevelopment of some property here in Charlestown, we want to be part of that process. This growth and this continued economic move, is dependent on both public and private sector. Hence, we are happy to partner with your Administration and to bring meaningful development to the people of St. Kitts and Nevis,” he said.

According to Mr. Morton, the planned developments in Charlestown afforded TDC the opportunity to expand and improve its facilities and also allow growth amongst staff. He announced the Company’s decision to appoint Nevisian Mr. Laughton Herbert to the position of Manager of the new facility and noted that the move was a demonstration by TDC that people who showed potential were given the opportunity and those who worked hard and remained committed were rewarded.

“A perfect example of this is the promotion today of Mr. Laughton Herbert who is himself a Michael King Scholarship holder having been awarded a scholarship to pursue tertiary education at University level and now back having served his apprenticeship under the capable leadership of Mr. Andrew Merchant.

“He has now been given the task of leading this particular department and we have every confidence that he and his staff will make a significant contribution to the development of our business unit here at City Drug Store 2011 Limited,” he said.

Mr. Morton gave the assurance that his Company would continue to invest with continued support from the government and people of Nevis and in that partnership they were prepared to give back as they received.