Japanese Ambassador Mr. Yoshimasa Tezuka delivering remarks at the Grant Agreement and Exchange of Notes signing ceremony at Gallows Bay in Charlestown on April 27, 2012
NIA CHARLESTOWN NEVIS (May 01, 2012) — Japanese Ambassador Mr. Yoshimasa Tezuka, expressed confidence that the new US$11,200,000 or EC$30million Charlestown Community Fisheries Complex financed by his government, would have a tremendous impact on the community in Nevis.

The Japan Official made the comment at the signing ceremony for the Exchange of Notes with the Government of St. Kitts and Nevis, for the development of a community fisheries centre in Charlestown on April 27th 2012. The project will be funded under the Grant Aid Scheme of the Government of Japan.

“This project will provide for the construction of a landing jetty, a fisheries centre, a workshop, a gazebo, fishing gear lockers and other facilities. This project is the first such fishery complex in Nevis…

“The fisheries facilities which were provided to Basseterre and Old Road have been effectively utilised. I have heard that the quantity and quality of fish caught have been steadily improving since the implementation of the project. I am pleased to see that they have made a great contribution to the promotion of the fishing industry… Therefore, I am confident that this Charlestown Fisheries Centre will be utilised by the locals, which will have a tremendous impact on the local community” he said.

According to Ambassador Tezuka, the new jetty at the new fishing facility would improve landing safety and efficiency while the processing facility and fish market equipped with an ice machine and cold facilities, would improve sanitary conditions and increase transaction volume.

He expressed hope that the project would ensure a stable supply of fresh and safe fish to the public and would contribute not only to the development of fisheries on the island but also to that of the tourism industry and as such would undoubtedly benefit the Federation.

The Japan Ambassador noted that over the years his government had been collaborating with St. Kitts and Nevis on the development of the local fishing sector.

Through cooperative efforts between both countries, he said Japan had provided fishing facilities and technical assistance to local fishing experts as well as training local fishermen. 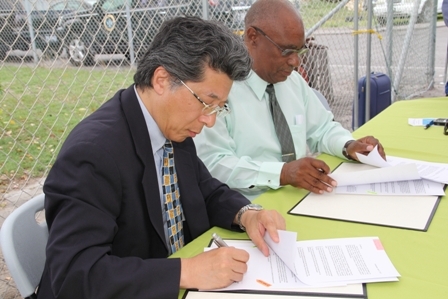 The Japan Ambassador also pointed to the collaboration between his government and St. Kitts and Nevis on the development of the local fishing sector.  Cooperative efforts between both countries, had allowed Japan to provide both fishing facilities and technical assistance to local fishing experts as well as training to local fishermen.

Mr. Tezuka used the opportunity to further speak to the international relationship history between Japan and the Federation.

“Both Japan and St. Kitts and Nevis are islands which have beautiful nature and rich marine resources. We both share the values of democracy and a market-oriented economy. Both our countries share a history of cooperating in the international arena and the Government of Japan trusts that our countries will maintain such cooperation,” he said.