Veteran Fishers on Nevis Mr. Clevin Christmas of Butlers (l) and Mr. Michael Daniel of Gingerland
NIA CHARLESTOWN NEVIS (May 01, 2012) — “I am welcoming this project with open arms,” those were the words of veteran fisherman Mr. Michael Daniel of Gingerland when the Grant Agreement was signed  and Exchange of Notes made between the Governments of Japan and St. Kitts /Nevis in Charlestown on April 27, 2012, at Gallows Bay in Charlestown.

Mr. Daniel who was among a number of fishers from across Nevis who witnessed the official signing which paved the way for construction of a top of the line EC$30 million project for Gallows Bay, funded by a grant from the Government of Japan, told the Department of Information in an interview that the modern facility would be of great benefit to his livelihood.

“This project will benefit me because my marketing process will be easier especially when there is an abundance of fish instead of me having them in my freezer at home and end up having to sell them for nothing, sometimes I have to give them away. It will benefit me because they will buy the fish, they have the facilities, they have the ice, they will have the storage and in most cases hotels and restaurants normally need fresh fish and they would be able to ice the fish instead of freezing the fish. 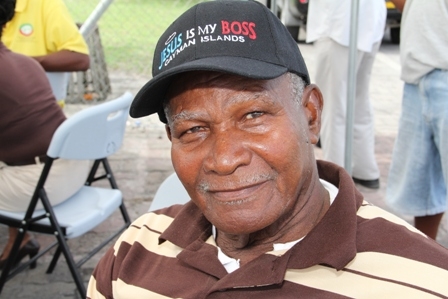 “At the old market here they have to freeze it and once it is frozen it is not fresh anymore. I have seen the process of the market in Old Road and I am happy to see how they operate there and I want to see it happen here. “I am welcoming the project with open arms,” he said.

The Gingerland Fisherman added that he had been a fisher for the past 24 years. Initially he was a pot fisher but subsequently changed his fishing methods to spot fishing, deep sea fishing and commercial fishing.

Mr. Clevin Christmas another veteran from Butlers also voiced his satisfaction stating that the new fisheries complex in Charlestown would take care of the burning issue of storage.

“I am from Butlers but I fish out of Oualie beach. I have been fishing for about 20 years and I target mostly the pelagics the red snapper and the grouper. One of the main challenges we have been having over the years is storage when the fish are available. 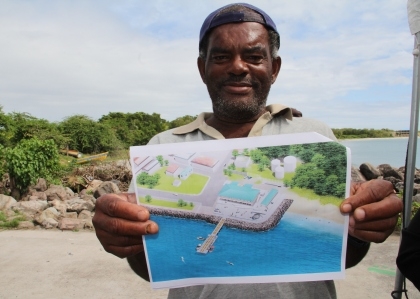 “The [new] market would really increase the storage capacity for us in that aspect when there is a lot of fish to be caught. Sometimes we have to stop catching because there is no storage the sale isn’t there so when the market is completed there will be a lot more storage and they will be purchasing a lot more fish and it would be available to the public,” he said.

Retired fisherman of over 60 years experience and founder of the Fishermans Cooperative on Nevis 83-year old Mr. Luther Williams from Brown Hill was also at the ceremony. He too expressed his satisfaction with the new fishing facility and offered some advice to those younger in the fishing trade.

“What I can say about that is it would be of benefit to the fishermen of today but they have to use their skill … When it comes to the project here this project is not bad. It would be of benefit to the fishermen. I only wish that I was not age because I can’t take part in it but it’s a good venture, it’s good that we have it and all we have to do is to make full use of it because fishing is something that you cannot loose from we only have to put out the effort. 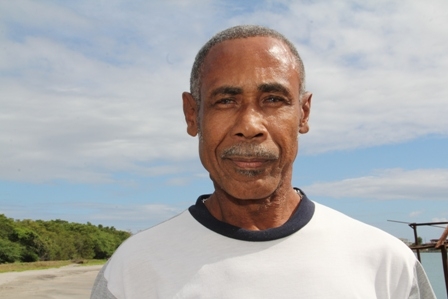 “It calls for spending but what you put out is what you can take back. You can’t put in nothing and expect to get back something. In my day going on sea I use to make good money from it but what the fishermen have to go out and do is deep sea fishing and not shallow bottom there are times you can do that but the deep sea fishing is what you have to do to bring fish that the consumer wants and after you can afford to do that you are well on the way,” he said.

Captain Roger Bailey aka “Badly Wounded” of Butlers an old Skipper by profession also gave his views on the project and thanked the Nevis Island Administration.

“I feel good about it…I think the new fisheries complex is very good, very good for the area because I am a sea man as well and I think it will bring a lot of investment for the area and I hope the project come off in the right way. 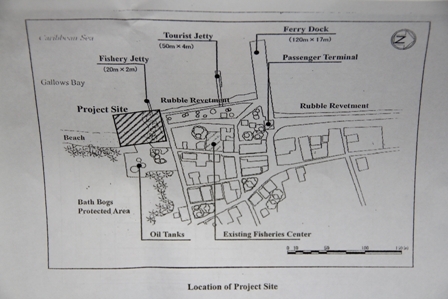 “I want to tell the Nevis island Administration may the Lord bless and keep and I hope it [project] come off in the right way and Hensley Daniel and whosoever in the government I wish them success. God bless,” he said.

Meantime, a resident of Charlestown who has lived near the site of the planned fisheries complex though not a fisherman gave the project his blessing as well. Mr. Donald Cornelius said he threw all his support behind the project.

“I come from just a few blocks from here and I am 100 percent behind the [Fisheries] Complex for one reason is that it is going to give Charlestown a completely different look where I am concerned. For now it is a bay front yes but it does not really have a proper look with a few shabby buildings. I think having this building here, in the future the owners of the older buildings might have to upgrade them so I think it is a very,very good idea,” he said. 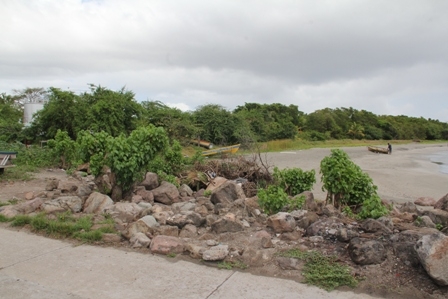 Mr. Cornelius also used the opportunity to speak against criticism of the site selected for construction of the modern fishing facility at Gallows Bay, a public beach.

“When people are commenting on spoiling the beach that is totally out of the question because normally over the years and I am almost 60 years, we normally bath higher up the pond, not immediately in front here [pointing to proposed site) because before time it use to have a lot of rocks here and so you just couldn’t bathe there. So I don’t see how really this thing could spoil the beach,” he said.