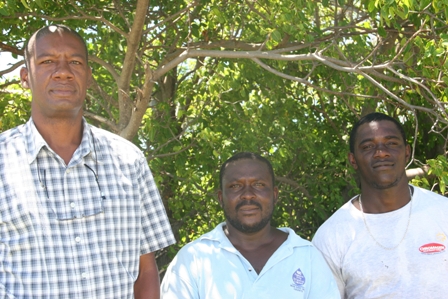 CHARLESTOWN NEVIS (September 15, 2010) — The installation of a state of the art drip irrigation system by Jamaican Drip Irrigation Ltd. at Indian Castle for the development of the Cotton Industry on Nevis is expected to be completed by Thursday.

The project is funded by the Japan Grant Assistance for Grass Roots Human Security with a US$97,000 donation that was made to the Nevis Sea Island Cotton Producers Cooperative (NESICOPS) in March 2010.

On a visit to the site on Tuesday, the Department of Information was informed by Director of Agriculture on Nevis, Mr. Keithley Amory that the project had commenced two weeks ago and was being managed by the Department to ensure smooth implementation.

However, he said once the installation is completed, the irrigation system would be utilised by both farmers and government to improve the cotton yield. 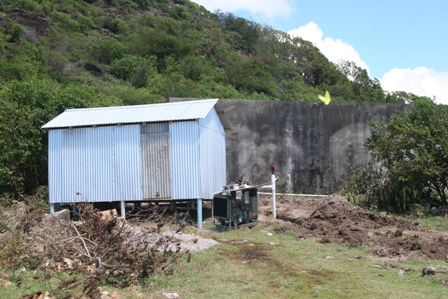 “Over the past years we have been plagued by drought conditions and this irrigation system is one method that we are hoping would increase the yield of cotton here on Nevis and make it one of our major export earning crops.

“We are expecting to plant at least 35 acres of cotton. In the past we have planted at least 30 acres. This will not be the only site for cotton production, we have another site at Indian Castle where at least six acres of cotton will be planted,” he said.

Notwithstanding, Mr. Amory was hopeful that private farmers would embrace the opportunity to cultivate cotton though recent heavy rains that had curtailed land preparation. 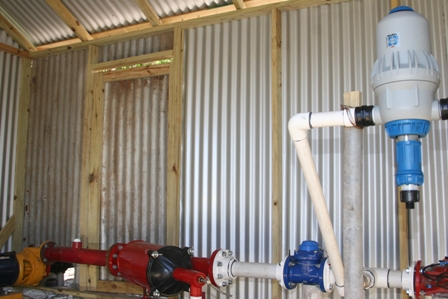 Inside the pump house

“Normally because of the drought situation that we face, we normally try to target the rainy season and we try to get in our crop at the beginning of the rainy season to help us with irrigation but now that we will be having this irrigation system in, we will be able to go in much earlier than normal,” he said, adding that the system would assist with direct plant seeding.

Since the reproduction of Sea Island Cotton in recent years, Mr. Amory reflected on the success it had had on the economy of Nevis. He noted that in the first year some US$100,000 had been derived from the first crop.

In subsequent years the production yield had suffered some setbacks due to the drought conditions that had affected the island and it was for this reason why it was imperative to have the irrigation system installed at Indian castle. 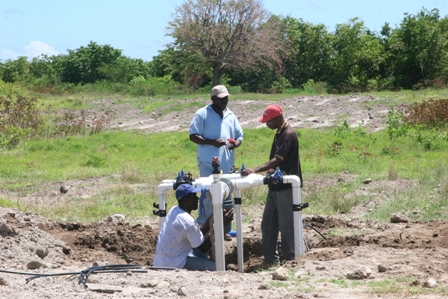 Working on one of the secondary control ledges in the field

The Director of Agriculture also used the opportunity to announce that the Department of Agriculture would be expanding the acreage set aside for cotton cultivation at Indian Castle, from 30 to 35. He said six will be reserved for farmers while the government will retain 30 acres for cultivation.

“This project is geared to help the farmers and we will ensure that they are beneficiaries of this project as well,” he said.

Meantime, Supervisor with Jamaica Drip Irrigation Ltd. Mr. Renico McDaniel described the modern irrigation system as something worthwhile for the island of Nevis

“It is a good system to have in Nevis, it is a modern form of technology. So we hope the people will accept this technology and use it to their best. 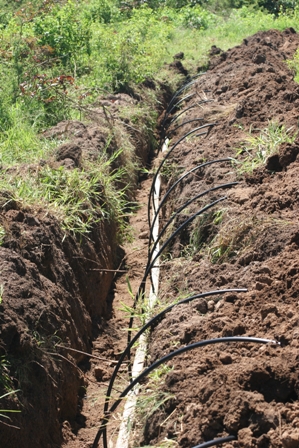 Irrigation pipes in the field

“With this system we can send our fertiliser and other chemicals through the system automatically with a mix right fertiliser irrigation pump. So it will be much easier for the farmers to mix the amount of fertilizer they need to send to their plants,” he said.

The system is hooked up to a pump house and water cistern through which three secondary control ledges will distribute water through five different valves which would transport the water to the various sections of the field.