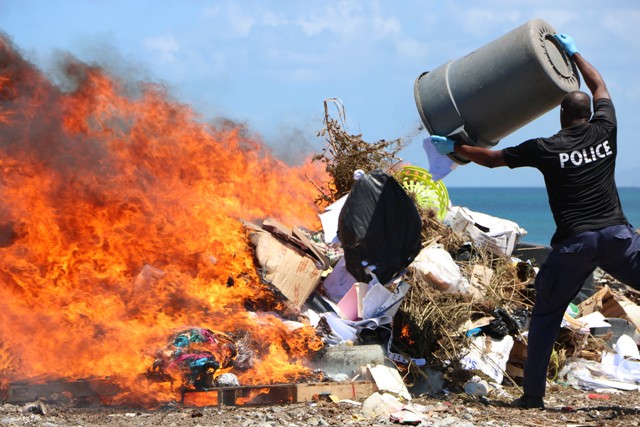 Inspector James Stephen, Head of the Nevis Task Force based at the Charlestown Police Station, feeds the fire burning more than EC$1million worth of illegal drugs in an operation at the Nevis Solid Waste Management Authority landfill at Long Point on June 13, 2019

NIA CHARLESTOWN NEVIS (June 13, 2019) —  In an effort to promote transparency and accountability in the Royal St. Christopher and Nevis Police Force, Nevis Division, illegal drugs estimated to be in excess of EC$1million were destroyed in an operation at the Nevis Solid Waste Management Authority landfill at Long Point on June 13, 2019. It was led by Inspector James Stephen, Head of the Nevis Task Force at the Charlestown Police Station.

The senior police officer said the police wanted to inform the public that they are disposing of the illicit drugs.

“We wish to tell the public that we have been transparent, that when we would have recovered cannabis, cocaine we are now being transparent in destroying it within the public, so…the public will have the confidence in trusting the police, that once we recover we destroy.

“We are destroying about 2 kilograms of cocaine with a street value of approximately EC$1million … and approximately $800,000 worth of marijuana… Most of this marijuana that is being destroyed would be plants we would have uprooted, and from individuals who would have been arrested for Possession,” he said.

The operation was carried out in conjunction with the United States Drug Enforcement Administration’s (DEA) office in Barbados and in keeping with the international drug enforcement agency’s international code: once confiscated, the drugs have to be destroyed within a stipulated period.

In the Federation there are two law enforcement entities engaged in the fight against drugs. They are the Nevis Task Force and the Drug Squad in St. Kitts both operate under the same mandate.