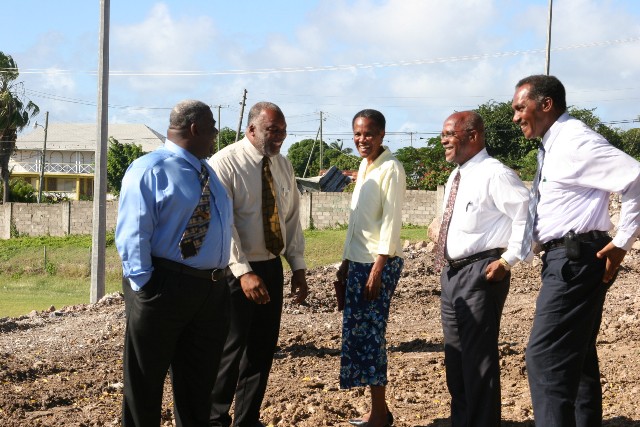 NIA CHARLESTOWN NEVIS (June 12, 2019) — Hon. Vance Amory, former Premier of Nevis says Hon. Malcolm Guishard of blessed memory, knew what he wanted for Nevis and left an imprint of teachable moments as he served in the Nevis Island Administration (NIA). He thanked the current administration for remembering his former colleague.

Mr. Amory who served with Mr. Guishard, made the comment at the Cabinet’s annual memorial service at the Bath Cemetery on June 11, 2019, to observe the 12th anniversary of his fallen colleague’s passing.

“I know we have learned so much from him and his legacy will live on, and I want to thank all of you for sharing in this service today. This act of recognition, this act of memorializing a great Nevisian, and sometimes those who now recognize his greatness did not support him at the time but that is the nature of politics, and the nature of human behavior.

“I want to say finally, he was a man of his word. A man who knew what he wanted to accomplish for Nevis, and who gave his fullest support at all times to the task at hand and I thank him and I thank all of you for recognizing the work he did,” he said.

Mr. Amory recalled his former colleague’s outstanding attributes which he says helped to pave the way for a better Nevis.

“For me, having worked with Malcolm during those turbulent years, and I don’t know how many of us recognize that the years 1987 to 1993 up to 1997, were very turbulent years in Nevis in respect of the change which we ushered in against all odds, and I think we need to recognize that Malcolm was a tower of strength. One who had very great ideas, and who was never afraid to put those ideas before the Cabinet so that we could implement them.

“Malcolm didn’t talk much. He was a man of action. He wanted to see things done and I valued that attribute in him because he was willing to come with an idea, and no matter how odd it might seem, he had a plan of how to get it implemented, and that I think is the hallmark of the man whom we are here today memorializing [and] remembering for his contribution to this country of Nevis and to the country of St. Kitts and Nevis, and to the people of St. John’s, especially, but like all good politicians he was not just confined to his constituency. He was a man for all people for all of the constituents of Nevis,” he said.

The former Premier stated that he was in England at the time of Mr. Guishard’s passing, and the memory of that day remains vividly etched in his memory.

However, Mr. Amory used the opportunity to express his profound condolence to those who continue to morn his loss particularly the family, his constituents and the people of Nevis since he is of the view that the spirit of Malcolm Guishard remains with them all.

“Even though… all of us… never served with him, his service to the island of Nevis is very clear in that, the platform was laid by him and the administration of the day, to ensure that we have an island that continues to prosper and continues to move forward leaps and bounds in the direction in which we are heading, and we will have to say thank you to Malcolm.

“His spirit is with us this morning…and he certainly, if he could have said it, would have been very appreciative of the fact that we continue to memorialise his life and time,” he said.

Mr. Jeffers also apologized on behalf of Hon. Mark Brantley, Premier of Nevis who he said was dealing with other pressing matters. However, his love for Mr. Guishard and commitment to the memory remains.