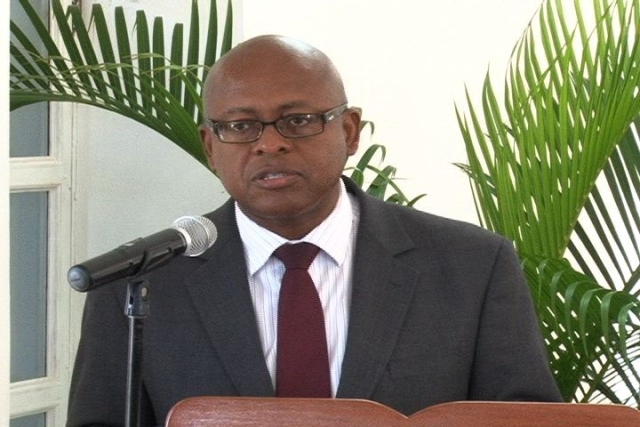 Permanent Secretary in the Ministry of Finance in the Nevis Island Administration Mr. Laurie Lawrence
NIA CHARLESTOWN NEVIS (December 11, 2012) — Members of the legal fraternity on Nevis are now better placed to practise with greater efficiency, now that the laws have been updated. The law review project for St. Kitts and Nevis which commenced in 2002 was officially launched in Nevis on December 6th 2012 at Hamilton House on Samuel Hunkins Drive.

In remarks at the launching ceremony of the New Revised Laws of St. Christopher and Nevis (Nevis Ordinances), Permanent Secretary in the Ministry of Finance Mr. Laurie Lawrence referred to the review for 1983 to 2002 as a welcome accomplishment and lauded the efforts of those who played a pivotal role in the Nevis leg of the project.

“I must commend the Attorney General the Hon. Patrice Nisbett for using his office to ensure the revision of the laws in Nevis was accorded high priority. Shortly after assuming the position, he insisted that the Legal Department in Nevis identified an individual with legal expertise to work under the supervision of the Law Revision Commissioner Mr. Mukassa to assist with the completion of the Nevis component of the project.

“Ms. Eldaria Jones was chosen to undertake the assignment and has worked diligently over the past 3 years. She must be commended for her sterling efforts. The Legal Department in Nevis must also be commended for the support, guidance and resources given to Ms. Jones to complete this assignment and of course, the Federal Government for spearheading this project and for also providing the financing,” he said.

The first phase of the project was launched in St. Kitts on March 23, 2012. However, before then the last law review in St. Kitts and Nevis was conducted over 50 years ago.

Mr. Lawrence also stressed that the objectives of the project went beyond digitisation and consolidation of the laws which aided lawyers in the conduct of research but more importantly it provided a greater impetus for economic and social development.

“The exercise which normally includes the redrafting of confusing laws, consolidating laws, updating and modernising laws and repealing obsolete laws  in order to be responsive to the changing needs of the society.

“In so doing, we are able to improve the justice system, more ably enforce the rule of law and promote greater transparency and certainty within the legal system. This will improve investor confidence, the ease of doing business and thus create a more conducive environment to stimulate economic growth,” he said.

Notwithstanding, the Permanent Secretary noted that the law review process was not exclusively for lawyers but should be inclusive of a full account of the views of civil society which would ensure that the most vulnerable in the society were protected and that human rights increased.

Mr. Lawrence stated that he had offered those comments because he was anxious to witness the process instutionalised through a proper functioning independent law revision commission. 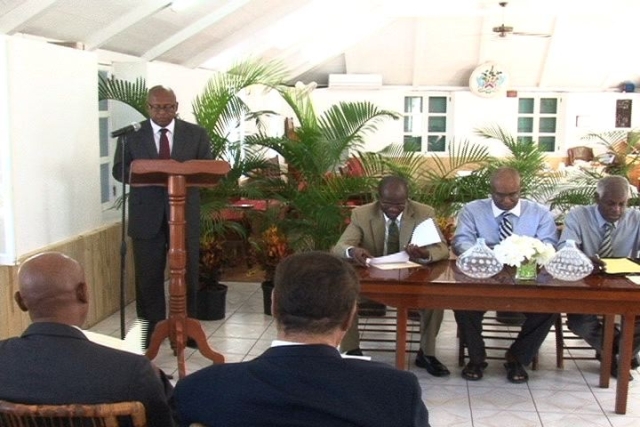 “This is necessary to ensure constant review and updates of statutes and other laws. It is my understanding that the last law revision exercise was undertaken over 50 years ago. These long gaps not only create inefficiencies in the legal system but make the exercise more costly.

“In addition, I am hoping that high priority will be given to the establishment of the electronic library so that regional and international lawyers and other organisations could have easy access to the general body of laws. This will give the Federation an advantage over many countries in attracting foreign investment to our shores, as lawyers and other professionals abroad will have access to reliable, current and real time information to advise their clients,” he explained.