A local entrepreneur on Nevis gave the assurance that she would continue in the footsteps of her late husband, to ensure that their poultry farm at Spring Hill continued to provide poultry and livestock to the people of St. Kitts and Nevis.
Mrs. Norma Tyson, widow of the late Mr. Oliver Tyson, told officials of the Development Bank of St. Kitts and Nevis of her intention at her home in Spring Hill on September 01, 2008, after the Bank’s representatives presented her with the last photographs taken of her husband while he was alive. Mr. Tyson passed away in June 2008.

“I am very grateful to the Development Bank for recognising my husband his memory will never leave my mind at all. Sometimes I cry and sometimes I am happy because we have had 30 happy years together. Anyone will know that living with somebody for so long when ever they depart this life, you always feel it deep down in your heart. So I am very grateful that you have chosen me for this project and I will continue to do the best I can
Acting Manager of the Development Bank of St. Kitts and Nevis (Nevis Branch) Mr. David Fox
to keep the farm going,” she said.

During the brief handing over ceremony, Acting Manager of the Nevis Branch Mr. David Fox explained that The Development Bank of St. Kitts and Nevis prided itself in its motto ‘The Bank that lends a helping Hand” and in keeping with the motto, the institution was honoured to have been involved with the Tysons for a project over the last 10 years. During that time they had successfully achieved the dream of the Nevis Egg Farm.

“Unfortunately, Mr. Oliver Tyson (the key man) departed this life in June 2008 but as fate would have it, one of his final unselfish actions was to contribute photographs of his poultry and livestock operation on page 15 of the Development Bank’s 2007 Annual report under the caption ‘ Working with our clients to build a better St. Kitts and Nevis’. 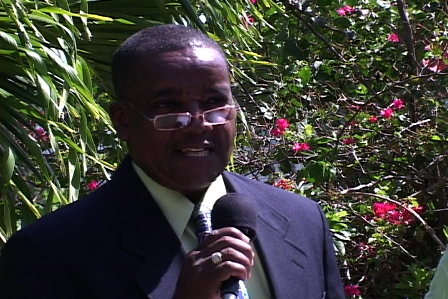 “Mr. Tyson was captured in some of these photographed which represent the last photographs he took alive. In recognition of the close relationship which existed between the Bank and Mr. and Mrs. Tyson and to further preserve his memories, the Development Bank of St. Kitts and Nevis proudly hands over these final photos in hard copy and on CD Rom to Mrs. Norma Tyson who with our continued support will keep the Nevis Egg Farm and poultry operation growing,” Mr. Fox said.

The photographs were presented by the Bank’s Loans Officer Ms. Hyacinth Pemberton.