(L-R) Member of the Board of Directors of the St. Georges and St. Johns Senior Citizens Home Ms. Sheila Evelyn, Nurse Manager at the Flamboyant Nursing Home Ms. Ena Sutton and Director of the Development Projects Foundation Incorporated Mrs. Myrthlyn Parry at the handing over ceremony of gifts from Nevisian resident in the United States of America Mrs. Marylyn Walters-Drew

NIA CHARLESTOWN NEVIS (October 25, 2012) — The main medical facility on Nevis and two homes for senior citizens were the beneficiaries of a number of medical supplies on October 25, 2012, from a Nevisian who resides in the United States of America through some assistance from the Development Projects Foundation Incorporated.

In a brief  handing over ceremony, representatives from the Alexandra Hospital and the Flamboyant Nursing Home in Charlestown and the St. Georges and St. Johns Senior Citizens Home in Gingerland, were presented with the supplies from Mrs. Marylyn Walters-Drew by Director of  the Development Projects Foundation Incorporated Mrs. Myrthlyn Parry. The brief ceremony was held at the Foundation’s office on Government Road. 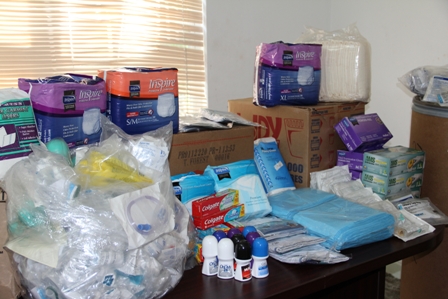 “These supplies were donated by Mrs. Marilyn Walters-Drew of Rawlins Village but who now resides in New York. She has been a frequent contributor to the Alexandra Hospital and the Flamboyant home and once again she has come to our aid.

“Shipping for these supplies was paid for by the Development Projects Foundation Inc in Nevis,” she said.

Mrs. Parry also explained that Mrs. Drew-Walters had also donated a brand new wheelchair to the St. Georges and St. Johns Senior Citizens Home in memory of her mother, Mrs. Miriam Adina Walters of Rawlins Village in Gingerland who had passed away on September 08, 2012. She also met the shipping cost for that particular gift. 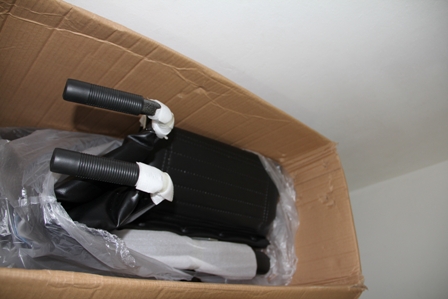 In response, Treasurer of the Board of Directors of the St. Georges and St. Johns Senior Citizens Home Ms. Sheila Evelyn thanked Mrs. Drew Walters and the Foundation for the generous contribution.

“It is so fitting this month being dubbed the Month of the Elderly for us to be receiving these lovely gifts and on behalf of the CEO Cannon Percival who is off island, the Board of Directors, the members of staff and the residents of the Home, I would like to thank Mrs. Parry, Mrs Walters-Drew and your organisation for your generous contribution.

“We really appreciate it and we pray that God will continue to bless you and your organisation in all that you do to assist our senior citizens,” she said.

Head Matron at the Flamboyant Nursing Home Ms. Ena Sutton, also extended gratitude on behalf of the Home and the Alexandra Hospital. 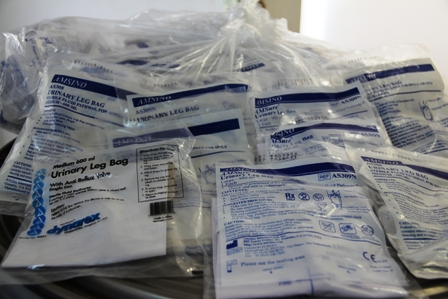 “Just yesterday we had at the Flamboyant Nursing Home a big celebration and we dubbed it ‘Recognising our Elderly’ and I don’t think it’s just by providence that we this morning are receiving some well needed gifts. One of the things we said yesterday at our ceremony was that thankfulness has an attitude, an attitude of joy and attitude of gladness.

“So this morning it is with a deep sense of gladness that I accept these gifts and I want to assure the donors, that they will be used to continually improve the quality of care that we give at the Flamboyant Nursing Home. So we thank you very much and please feel free to continue this gesture,” she said.