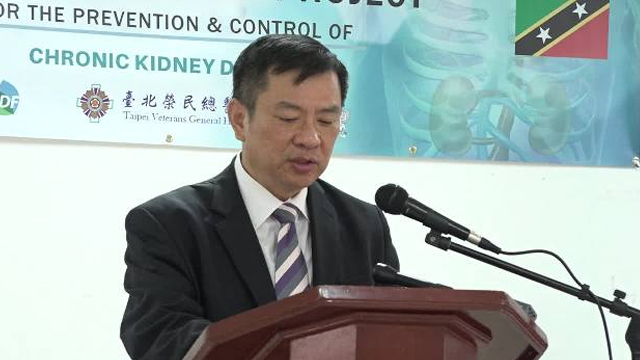 His Excellency, George Gow-Wei Chiou, Resident Ambassador of the Republic of China (Taiwan) to St. Kitts and Nevis, delivering remarks at the first workshop at the St. Paul’s Anglican Church Hall on November 07, 2017, in the three-year Prevention and Control of Chronic Kidney Disease project

NIA CHARLESTOWN NEVIS (NOVEMBER 09, 2017) — His Excellency, George Gow-Wei Chiou, Resident Ambassador of the Republic of China (Taiwan) to St. Kitts and Nevis, says an ongoing capacity building project, the Prevention and Control of Chronic Kidney Disease signals the beginning of a new type of cooperation for the people of the Federation.

The Ambassador, while delivering remarks at the opening ceremony at the St. Paul’s Anglican Church Hall on November 07, 2017, for the first of three workshops in the three-year medical and public health project, said the project is the first of its kind to be introduced and implemented by the Republic of China (Taiwan), since establishing diplomatic relations with the Federation in 1983.

Ambassador Chiou pointed to the three areas of focus of the project.

“The first is to establish a database for chronic disease patients and its high-risk group. A patient’s tracking system is scheduled to be established at the same time. The second is to strengthen the function of the Nephrology Unit at the Alexandra Hospital and the capability of the health personnel addressing chronic kidney disease.

The project is designed to strengthen the capacity for prevention and control chronic kidney disease in the Federation, through early detection and case management. It is expected to result in a reduction of risk and cost associated with the disease.

Ambassador Chiou, explained that the project began in April this year, when three medical professionals in Nevis were invited to attend a training programme at the Taipei Veterans General Hospital in Taiwan.

The training component will continue to precede the workshop every year for the three-year duration of the project. In total, nine health care personnel will be trained in Taiwan.

Personnel from the Taipei Veterans General Hospital are facilitating the first workshop. They are Dr. David Yang, a specialist in the area of Nephrology and Registered Nurse Ms. Ann Wang, a Clinic Instructor at the Haemodialysis Centre.