Mr. Daniel was at the time delivering remarks at a Celebratory Service held in her honour on her 100th birthday on January 19th at the 125 year old New River Methodist Church just a stone’s throw away from her home.

The Minister told family members and well wishers who packed the church to share the momentous occasion, that they should not fear growing old in Nevis and pointed to a number of programmes the Nevis Island Administration (NIA) had in place to keep the elderly alert and on the go.

“Have no fear of growing old on Nevis. We have eight programmes to keep you bright and burnished. We have the Celebration of Milestones, Hot Meals programme, Home Help Care, Outreach Project, Recreational Programmes, Special Social needs (public assistance and housing) and a Steel Pan Orchestra.

Notwithstanding, Mr. Daniel urged all to use the celebration of the life of Ms. Powell to continue to care for the Senior Citizens on Nevis and noted that one only got old when regrets took the place of hopes and plans. 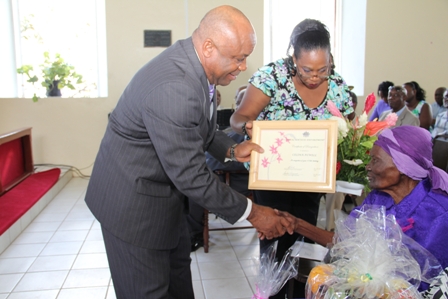 “We gather here today to celebrate one who understands and the zeal and zest for living. We gather because she is amazing. She has seen adversity. She has been an amputee for more than 30 years. Like Les Brown says she has turned setbacks into come backs. When life knocked her down she landed on her back so she could get up again” he said.

The Minister described the occasion as joyous because in his view it was not an achievement had by many.

“She understands that she is wonderfully made and has used her time here on earth to spread joy and happiness. Her presence illuminates, she is very lucid and has a sharp wit,” he said.

Mr. Daniel said when he visited the Birthday Girl five years ago on her 95th birthday with his Cabinet Colleague Hon. Carlisle Powell and her grandson, he told her that at 95 she should just pick up the singles and not try to hit any fours and sixes and here she was today with a century and thought she should stay in the wicket. He asked those present to pause and give that remarkable woman who had seen the best and worst of times a rousing round of applause for her contribution to family, community and country.

“She has defended the odds. She is a god example of appreciative inquiry at work since she pays attention to the best of the present; she is aware of the value, strength and potential of her family and friends; she has overcome the limits that society imposes on people, in particular amputees and she places great emphasis on values and dialogue. 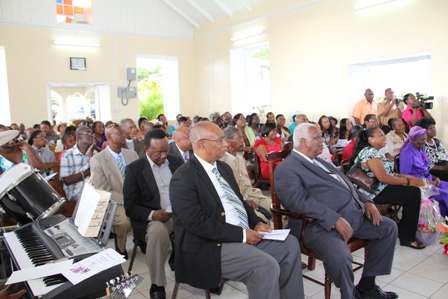 “I am sure that her children, grand children and great grand children, here gathered, have already begun to document her life story. Her story has to make interesting reading and reach the threshold as a great human interest story,” he said.

Mr. Daniel said he was persuaded that Ms. Powell’s achievement of 100 years was linked to a reward for effort and believed that she remembered her creator in the days of her youth so that her years have been long.